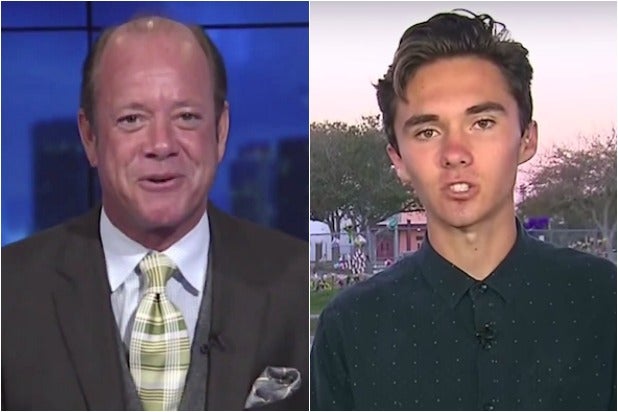 Jamie Allman, a conservative commentator at a Sinclair-owned television station, resigned after tweeting that he planned to sexually assault Parkland shooting survivor David Hogg with “a hot poker.”

Allman hosted a show on KDNL, a Sinclair Broadcast Group-owned ABC affiliate in St. Louis, as well as a morning FM radio show. He lost advertisers after the threat.

Asked if Allman had resigned, Ronn Torossian, a spokesperson for Sinclair, told TheWrap Monday: “Yes, his show is cancelled and he is off the air immediately.”

Hogg has become an object of derision among some conservatives because of his aggressive arguments for gun control. On March 26, Allman tweeted: “When we kick their ass they all like to claim we’re drunk. I’ve been hanging out getting ready to ram a hot poker up David Hogg’s ass tomorrow. Busy working. Preparing.”

Allman’s remark came two days before Fox News host Laura Inghraham posted a tweet accusing Hogg of “whining” about not getting into colleges he applied to.

Hogg responded to Ingraham’s March 28 tweet by urging his followers on social media to target Ingraham’s advertisers. Ingraham’s subsequently apologized, and noted that anyone would be proud of his 4.2 GPA.

Since the “whining” tweet, “The Ingraham Angle” had its ad time cut roughly in half, according to CNN.

The resignation comes as Sinclair is under fire for requiring anchors to read a script bashing the news media and echoing talking points from President Trump. As a result, Sinclair is the target of a #SinclairStrike movement calling for a one-day walkout on May 15. Activists have also called for a Sinclair boycott.

The company hopes to acquire Tribune Media’s 42 local TV stations in a $3.9 billion deal, but still needs approval from the Department of Justice and Federal Communications Commission.

St. Louis radio station FM NewsTalk 97.1 did not immediately respond to a request for comment late Monday on whether he will remain on the air.