Anyone who complains “they don’t make them like they used to” clearly hasn’t been paying attention to the rise of writer-director John Carney, who has discovered a magical alchemy that allows him to make upbeat movies that eschew cynicism and pessimism. Even though his work never shies away from sadness, loss and melancholy, he’s got a gift for dramatizing the ways in which the power of music can elevate people out of the worst moments of their lives.

On the heels of his acclaimed “One” and “Begin Again,” Carney scores a hat trick with “Sing Street,” another movie-with-music (“musical” doesn’t quite fit his oeuvre) that affirmatively answers the question that was the original title of his second film: “Can a Song Save Your Life?”

Teenage Conor (Ferdia Walsh-Peelo, in a magnetic debut performance) could use a bit of rescuing. It’s the mid-1980s, the Irish economy is in the crapper, and his constantly battling parents (Aidan Gillen and Maria Doyle Kennedy) have to transfer Conor to the Catholic high school on Synge Street as part of the downsizing of the household budget. The new school is a tough place — there are several bullies among his fellow students, and the clerical faculty members are either somnolent or sadistic — but across the street there lives a bewitching girl named Raphina (Lucy Boynton, “Miss Potter”), who claims to be a model.

To get Raphina’s attention, Conor offers her the lead in his band’s music video — which means he has to assemble a band. Force-fed some of the era’s most iconic music from his slacker older brother Brendan (Jack Reynor, “Transformers: Age of Extinction”), Conor starts assembling together classmates to play instruments, write songs, and manage the group. (He even converts a bully into a roadie.)

Also Read: 'American Psycho' Broadway Musical Is So Bloody, Audiences Are Getting Splattered

Music isn’t going to make Conor’s parents stop fighting, or his principal stop intimidating him — even though he imagines a perfect music video shoot, to one of his band’s catchy tunes, where everything in his life becomes perfect — but it gives him purpose and hope, and a reason to follow the legions of fellow Dubliners who are fleeing to London in the pursuit of job opportunities. If there’s no work to be found, the film asks, why not aspire to rock stardom? 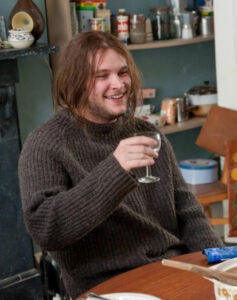 Carney remembers the 1980s with precise accuracy; one of the film’s best running gags is Conor’s hopscotch through different looks of the era, from John Taylor glam to Robert Smith gloom. There’s no snobbery about the music, either, with the bass lines of Duran Duran’s “Rio” and Hall & Oates’ “Maneater” being given their proper respect.

The young cast, most of whom were born after The Smiths broke up, convincingly portray a group of kids who transform from an awkward assemblage of would-be musicians to an only-slightly-awkward assemblage after only a few weeks of rehearsal. Walsh-Peelo and Boynton have significant chemistry, with Raphina burying her pain under a cool façade while Conor explodes with adolescent earnestness and affection. Reynor, capturing a mix of Jack Black in “High Fidelity” and Seth Rogen in any comedy, steals his scenes as Conor’s musical Sherpa and romantic tutor.

Always essential to the delight of Carney’s films are the songs themselves, and “Sing Street” serves up several delightful ones — “Drive It Like You Stole It” might be reason enough to buy the whole soundtrack, and the performance scenes share the dynamism of the ones from “Once” and “Begin Again.” Carney isn’t interested in gritty reality, so when his characters sing on a rooftop or an alleyway, there aren’t passing trucks or car alarms to mess up the moment.

If you’re put off by the filmmaker’s previous work, then the autobiographical “Sing Street” isn’t going to be the movie that wins you over. But fans of Carney’s lush romanticism and hook-laden lyricism will be thrilled to add this one to their playlist.