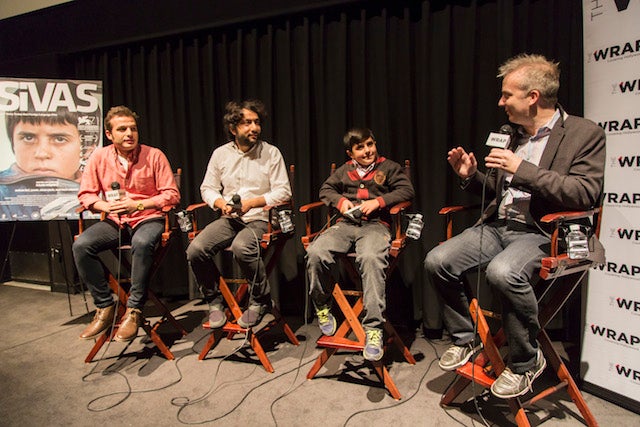 Sivas screening and Q and A at the Landmark Theatre.Turkish drama film directed by Kaan M¸jdeci. The young boy is Do?an ?zci as Aslan.

Perhaps the scariest performers in the Oscar race are the hundreds of fighting dogs whose gory combat was recorded by director Kaan Mujdeci for “Sivas,” Turkey’s Best Foreign Language Film Oscar entry, about a boy and his fighter dog.

The dogs seen inflicting horrific wounds in the film actually had their fur daubed with bloody makeup and their mouths swabbed with lotion to make them incapable of biting hard, though it sure looks as if they do.

“They grab with their jaws, but their jaws are so weak they can’t take a bite,” said Mujdeci. “Some might have felt disturbed by the violence but just to keep the realism in the movie, it was important to make these fights plausible. It’s almost like a reality show that’s a little bit scripted and staged.”

In fact, Mujdeci developed “Sivas,” his first feature, by first spending two years making a documentary about Turkey’s illicit dog-fighting culture. “I did some research on the dogs and the owners, their psychology,” he said. “What was really important was differentiating all these dogs’ styles, their approaches: some bite from the neck, some go for the feet.” If you see a 100-kilogram dog growl in “Sivas,” you are hearing a 100-kilogram dog.

Mujdeci auditioned dogs, chose one to star as the title character, and made him feel like a warm part of the filmmaking family. He also auditioned 1,000 children to star as the dog’s rescuer and owner, and chose first-time actor Dogan Izci, now 12. Mujdeci worked for three months with Izci, the dog, and a small cast in Mujdeci’s grandparents’ village, where he knew how to make things look authentic.

Izci, whose tough, volatile sensitivity plays dramatically on screen, said he tried to quit three days before filming began. “I didn’t think I could do it,” said the shy Izci, who won the Bisato d’Oro critics’ prize for best actor at Venice Film Festival. Mujdeci won a Special Jury Prize and got a Golden Lion nomination.

Mujdeci said his original inspiration for the film was a martial arts tournament for kids ages 12 to 16 that he photographed. “What struck me was how their parents rallied them, pushed their kids to fight with one another,” he said.

Researching his dogfighting documentary, he found similar psychology at work. And he behaved in somewhat the same way on set, guiding Izci’s performance. “The handheld shots were almost like a documentary,” said Mujdeci. In Izci’s big rage scene, the director said, “I’m behind him yelling at him and throwing rocks at him, so he could get into the mood of the scene. His greatest strength is he’s a very, very fast learner and he’s a smart kid.”