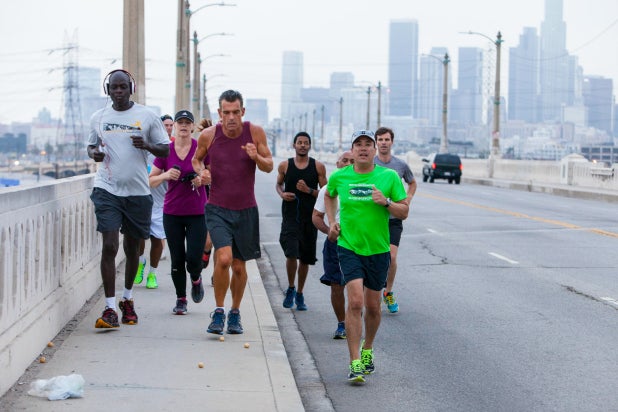 Los Angeles’ Skid Row is rarely a place filmmakers go looking for inspirational stories. It has been home to the city’s homeless population since the 1930s and has only grown in size thanks to the housing crisis. In “Skid Row Marathon,” director Mark Hayes decides to explore not Skid Row in particular, but a judge who has formed a running club with some Skid Row residents to train for marathons, and offers insights into this unique group of people who have struggled in life.

Though some of the stories are inspirational, Hayes takes on a “white savior” view too often, making the documentary feel misguided and detached.

It’s always a little bit strange for me to see how a writer or director who isn’t from L.A. or has only lived here a few years, takes on a subject that is very much an L.A. thing. Over the years, Skid Row has become the homeless capital of America. I can recall being about six years old and driving through Skid Row to get to my mom’s favorite seafood market and seeing sidewalks full of shopping carts, tents and cardboard boxes surrounding the Los Angeles Mission, as people came in and out of the mission, in dirty clothes, looking weary and heading to wherever they would be laying their heads for the night.

As a child, I was optimistic, thinking eventually everyone would get a home and a happy ending because there is no way we couldn’t help them, right? Instead, Skid Row has become a piece of pop culture: It’s been a location in music videos (like Michael Jackson’s “Beat It”) had a rock band named after it, and even inspiring a song in the New York-based musical “Little Shop of Horrors.” And yet, Skid Row itself remains covered in poverty and despair. That’s a bit what “Skid Row Marathon” feels like — just another addition to pop culture.

The central subject of the film is criminal court Judge Craig Mitchell, a man whose mother used to take him to Watts instead of Disneyland and who, at one point, was about to join the priesthood before deciding on a law career. A former defendant contacted him after his release from prison and asked the judge to meet him at the Midnight Mission homeless shelter, where he was living. Mitchell felt inspired to start a running club for some of its residents, which include a former gang member (Rafael Cabrera), a single mother (Rebecca Hayes), a musician (Ben Shirley), a painter (David Askew), and a former college athlete (Mody Diop).

The film cuts to and from each runner’s story back to the judge’s, as well as to footage of the group running and their journeys to and from marathons in Ghana and Rome. It details each person’s struggle, largely with addiction, and does touch a bit on a darker moment when one of the runners relapses and returns to living on the streets. The footage, shot internationally by Hayes and cinematographer James Stolz, made those specific scenes feel like a travelogue and enhanced those particular stories, but when it comes to Skid Row, it all feels a bit light.

Wanting to be simply a positive story took away from the realism of what that area is and what it represents in one of the wealthiest cities in the United States, which strips away the elements of what would make this documentary feel more vital.

The group of runners is diverse, but four out of the six are men of color, and the optics are uneven when deciding who is doing the actual work here: Is it the judge for putting together the club, or is it the group for working to overcome their individual struggles? I understand what the filmmakers were trying to do in returning to the judge, over and over, as he is the one who leads the club, but tonally, it feels as if the film were praising him for his efforts for giving this group a chance of redemption when it’s really the people in the group themselves who deserve that recognition.

“Skid Row Marathon” is a light-hearted attempt to show a softer side of a pressing issue. While the film will no doubt inspire some, it lacks an understanding of the real issues that exist in that environment. It becomes part of the system that proclaims that homelessness is a problem, but it does nothing to say why.