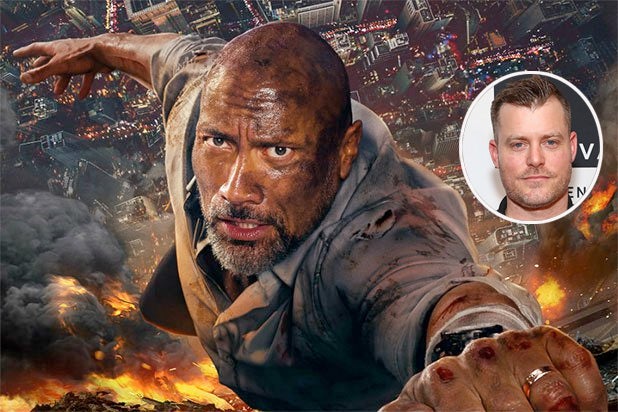 The heart-pounding fun of Dwayne Johnson’s “Skyscraper” wasn’t just movie star bravado and CGI for director Rawson Marshall Thurber — it was math mixed with a little but of adrenaline.

“This is a thrill ride — you bought your ticket and here it is,” Thurber told TheWrap. “We didn’t consult with math professors to make sure it made sense, but we did the math with ILM [Industrial Light & Magic] and we knew we were close. People aren’t buying tickets to see a documentary about a guy jumping a big jump. With any action sequence, you want it to feel believable — but 10 percent more. You want it to be improbable, but not impossible. You want it to feel insane, but not unachievable.”

In the movie, Johnson tries to get into a building that is engulfed in flames in order to save his family. The only way in is to jump from a crane into the burning building, 100 floors above ground.

Featured in the trailer of the film, many have already toiled over the plausibility of Johnson’s big stunt (the film opens Friday). Most recently, a University of Central Florida physics professor named Costas Efthimiou weighed in, saying that there is, indeed, a window of opportunity and plausibility.

He has taught classes in which he studied films like “Armageddon,” “X-Men” and “Black Panther.”

“Most scenes and many entire movies defy the laws of the current universe. In this case, the movie’s director was either lucky or had done his homework,” Efthimiou said, adding that such a jump requires a specific combination of horizontal and vertical speeds.

Of course, a stunt like this is a difficult feat, even for someone like Johnson. But at no point did Thurber think the star was doing anything too dangerous.

“There’s always jeopardy, and the super crane jump was definitely the most challenging, technically,” said Thurber. “There were a lot of different pieces, shot over different days, and we had to make sure they fit seamlessly together with the CG. There is also a sequence in the film where Dwayne and Neve [Campbell] have to cross a bridge and that was complicated because it was suspended 40 feet in the air. That was challenging due to the scope of pieces and mosaic tiles, and then you’re dealing with actual fire but you can’t bring fire too close to the actors, so you have to do what you can.”

Many fans saw similarities to “Die Hard” and “The Towering Inferno,” and Thurber said that was exactly the point.

“When people say it’s just ‘Die Hard’ with The Rock, that’s exactly right!” said Thurber. “If you don’t want to see that, then don’t come. It’s a love letter to those movies, but whenever you make a movie about bad guys in a building with more than two stories, you’re going to get compared to ‘Die Hard.’ It’s on Mount Rushmore of films for a reason.”

Combine fire with scenes shot high above the ground and you have a thrilling film that will get your heart rate up to 100 bpm (yes, several moviegoers treated to the film early have reported heart rates even higher than that). But Thurber and Johnson didn’t stop there — Johnson’s character Will Ford is an amputee. And Thurber said that lifted the stakes.

“When we decided he was going to be an amputee, it raised the stakes for us from an execution standpoint, because we wanted to honor the people right,” he said. “In my research, I came away inspired — most of the amputees you talk to say their amputation was a gift and they are leading a life that they wouldn’t have led before. That they take full charge of their life in a different way. It was important to get the details right, to not use it as some sort of gag. It was important to Dwayne and I can’t tell you how proud I am of this film.”

Thurber has other impressive credits to his name. In 2004, he wrote and directed “Dodgeball: A True Underdog Story,” followed by 2008’s “The Mysteries of Pittsburgh” starring Jon Foster, Peter Sarsgaard and Sienna Miller. Then, he helmed the comedy “We’re the Millers” as well as Johnson’s “Central Intelligence,” also starring Kevin Hart. So far, Thurber’s “Dodgeball,” “We’re the Millers” and “Central Intelligence” have grossed a collective $654 million at the box office worldwide.

Thurber said he wanted to direct an action film since he was 8 years old — and with “Skyscraper” and 2020’s “Red Notice,” which will also star Johnson as well as Gal Gadot, he’s achieved his dream.

When asked how he jumps from genre to genre and whether action is perhaps his favorite kind of film, Thurber said, “I don’t think any filmmaker can say what their favorite genre is. I just like telling stories, I love comedy — I made several of them — but I always wanted to make an action film. It’s a strange thing: they are very different genres, but the process of making them is nearly identical… In a lot of ways, making an action film was easier than making an action film.”

Thurber wrote the pitch for “Red Notice,” and his concept sparked a bidding war among almost every major studio, with Universal and Legendary winning out and handing The Rock his career-best paycheck of $22 million. Moreover, it resulted in the largest pitch sale in film history. Thurber is said to receive an eight-figure salary while the project itself will cost upwards of $125 million.

“It was an idea I came up with, and I pitched it to Dwayne and he loved it,” Thurber said of “Red Notice.” “We finished up ‘Skyscraper’ and went around town offering it up for sale. Now we have the incredible Gal Gadot — it’s funny, as I was pitching her character, I always called the character Gal Gadot.”

He added, “It’s kind of a throwback, a blend of ‘Oceans’ 11’ with ‘The Thomas Crowne Affair,’ and it’s a fun champagne heist picture featuring international exploration. I started writing the script two weeks ago.”

Thurber was an assistant to screenwriter John August, beginning on his 2000 TV show “D.C.” But Thurber’s talent doesn’t just stop at writing and directing — he had cameos in films like “Easy A,” “The Wedding Ringer” and of course, “We’re the Millers” and “Central Intelligence.” Evidently, Thurber has worked with a bunch of A-list actors (he’s still hoping for Tom Cruise to give him a call) but understands his luck of working with Johnson and movies over and over again.

“The thing I learned from Dwayne from ‘Central Intelligence’ is how funny he is,” said Thurber. “I don’t think there is an actor out there right now who has the range he does — he does a comedy like ‘Central Intelligence,’ he does a musical like ‘Moana’ and he does straight-up action, and then this performance is his most vulnerable — I’ve never seen him like this. Early audiences say that it’s his best performance, and that he’s submitted to do something he’s never done before. In a lot of the movies he makes, he’s bulletproof, but in this movie he’s battered and broken and will do whatever he can to save his family. That’s a credit to him — he’s the biggest movie star in the world, he doesn’t have to do that and show his vulnerability like this.”