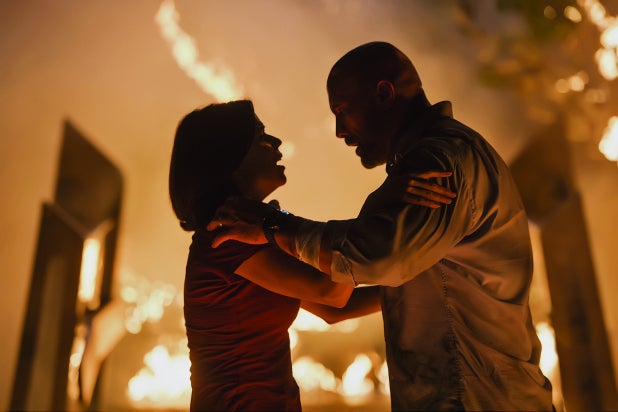 “Skyscraper” doesn’t expand the scope or the rules of the summer action blockbuster, but it does follow the recipe in a supremely satisfying way.

So yes, you’ll recognize the DNA of other movies here — not just obvious antecedents like “Die Hard” and “The Towering Inferno,” but also “Mission Impossible: Ghost Protocol” and even “The Lady from Shanghai” — but that familiarity won’t interfere with the vertiginous thrills, the breathtaking stunts (and CG), and the near-constant state of adrenaline-fueled action.

Writer-director Rawson Marshall Thurber (“Central Intelligence”) sets up the pins to knock them down later: there’s nothing we learn in the first 10 minutes of the film that won’t come up again in the last 10 minutes. Still, he sets up an impressive array of obstacles, as well as characters who are solid enough to overcome them.

In an opening flashback 10 years earlier, FBI agent Will Sawyer (Dwayne Johnson) loses a leg when a hostage situation goes from bad to worse. Sarah (Neve Campbell), the surgeon who stitches him up, becomes his wife, and as the film opens, they’re in Hong Kong, where Will is up for a job as chief of security for The Pearl, a mega-high-rise that’s three times as tall as the Empire State Building.

It turns out, of course, that Will is being set up as patsy by a group of no-goodniks led by international mobster Kores Botha (Roland Møller, “The Commuter”) who wants a MacGuffin that’s locked up in a safe nestled in the penthouse owned by the Pearl’s billionaire builder Zhao Long Ji (Chin Han, “Marco Polo”). Ultimately, the plot is there merely as connective tissue between the stunts that involve getting Will back into a burning skyscraper (via a crane 100 stories above the ground) and his eventual rescue of Sarah and their twin children (McKenna Roberts and Noah Cottrell).

Sarah, it’s worth nothing, is nobody’s victim; a Navy surgeon who served three tours in Afghanistan, she’s just as capable as Will when it comes to facing whatever catastrophes come her way. (There’s one less element of surprise for the Sawyers in the casting of the bad guys; some of them are supposed to be reveals along the way, but the actors in question do everything but twirl their mustaches.) Will’s prosthetic leg, in the meantime, winds up being more of a secret weapon than an impediment, as the script cleverly finds ways for it, and for duct tape, to come to the rescue.

(It’s worth noting that “Skyscraper” is hitting theaters the same weekend as “Don’t Worry, He Won’t Get Far on Foot,” which features Joaquin Phoenix as quadriplegic cartoonist John Callahan. The casting of these actors as characters with disabilities will and should stoke the conversation about whether or not such roles should be played by able-bodied performers.)

Cinematographer Robert Elswit (“Inherent Vice”) makes great use of the anamorphic screen, whether he’s capturing the vast, vertical wonders of the Pearl or creating those heart-in-throat shots of Will dangling outside its windows. The raging fire against the backdrop of the night sky (and the bright lights of downtown Kowloon) give the story a dazzling and occasionally terrifying backdrop.

“Skyscraper” doesn’t change the action-movie game the way “Die Hard” did, but it’s a solidly entertaining summer diversion best enjoyed on the biggest theater — or even better, drive-in — screen you can find. And if you’re afraid of heights, make sure there’s an armrest — or even better, an arm — that you can grab.