In the aftermath of South by Southwest’s opening weekend, some buzz films have established themselves — along with the must-see, mind-bender midnight movie of all time. 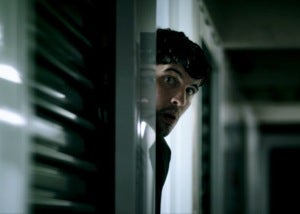 “Weather” (pictured) is about a forensic scientist in Chicago who quits, returns to his hometown in Portland and slips into a deceptively simple routine as he takes a job at an ice factory and re-connects with his old girlfriend. But the tone shifts into a amateur detective story as someone goes missing and he takes it upon himself to solve the mystery.

Not a narrative doc, per se, “Parking Lot” takes the talking-head approach to give a voice to 21 of the hundreds of lot attendants that approach their job as something akin to a Zen state — when they’re not being screamed out, dealing with drunk University of Virginia frat boys or chasing after people who refuse to pay.

Shot over a three-year period, director Megan Eckman and assistant director Christopher Hlad shift seamlessly from former attendants at a lot in Charlottesville as if it were a group of people all reading from the same script. It doesn’t hurt that a majority of the lot’s employees are collected from UVA’s anthropology, religion and law schools.

Sunday too flight at the Alamo Lamar, with the one-two combo of “Red White & Blue” and “Serbian Film.” The former presents a terse and expertly styled ode to Austin, America and the classic theme of revenge that will make the people who thought “The Killer Inside Me” was brutal drop to the floor in fear.

It’s lewd, it’s bloody and it sent more than a few people from the Alamo since they didn’t know what they were in for.

If you’re in Austin on Wednesday, you’ll have one last chance to catch “Serbian Film” before it may disappear forever.