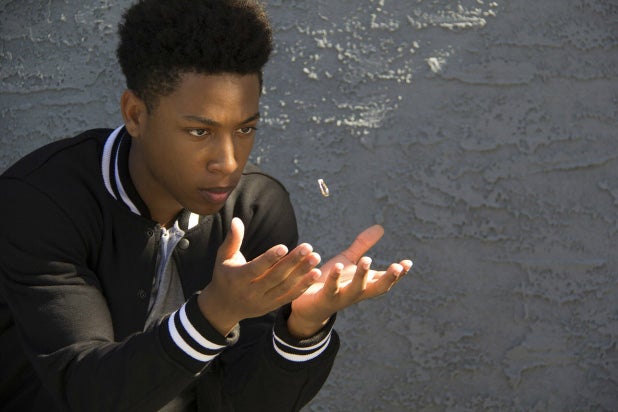 The Sundance hit “Sleight,” about a young magician caught up in the criminal world, grew out of a short film, and it retains the appeal of something hand-crafted and small: it’s a tight tale well-told, with an appealing hero, a direct route to satisfaction, and the ever-present sense that the merest turn toward stylistic extravagance or adventure frippery would sink it.

The spelling of the title speaks to the magic of wonderment in close quarters, but the word it sounds like is an unintentionally positive attribute: “Sleight” is slight in the good way, because it floats along and draws your attention instead of yanking it by the collar.

J.D. Dillard’s debut feature is also a deceptively canny mix of a few genres: the ‘hood drama, comic books (independent Oni Press even created a companion prequel comic), sci-fi, and noir. Its protagonist is Bo (Jacob Latimore, “Collateral Beauty”), a smart, personable kid derailed from a promising academic future by the death of his mother.

Raising his younger sister Tina (Storm Reid, the upcoming “A Wrinkle in Time”) in their modest cottage apartment, Bo earns his money doing one thing he loves — dazzling pedestrians with close-up street magic — and another he tolerates, selling drugs for charismatic local dealer Angelo (a rock-steady Dulé Hill). Sometimes the former helps him out with the latter; when a buy gets interrupted by cops demanding a body search, Bo’s got the skills to hide his product without tossing it.

One day after impressing a girl with a card trick, he finds her number on a piece of paper among his tips. The admirer’s name is Holly (Seychelle Gabriel, “The Legend of Korra”), and when they meet for a casual date, there’s an unmistakable spark, thanks in no small part to how similar her and Bo’s situations are: she’s a community college student who wants more out of life, but feels stymied by pressures at home. That she hits it off with Tina, and the nice neighbor (Sasheer Zamata, “SNL”) who often helps Bo with babysitting, is another plus.

Also Read: Black-Owned Hair Care Company Apologizes for Ad With White Woman: 'We Really F-ed This One Up'

But Angelo’s grip on Bo’s life asserts itself with increasing danger when a rival dealer’s encroachment on Angelo’s territory spurs him to pull Bo deeper into the violent heart of the job. As a harsh reminder of who he works for, it spurs Bo to orchestrate his exit so he can start a new life with Holly and Tina. But fooling bystanders with illusions and pulling one over on a savvy criminal prove to be miles apart when it comes to the consequences. When Tina is kidnapped as a result, that Houdini poster on Bo’s wall — with its caption “Nothing On Earth Can Hold Houdini a Prisoner” — starts to feel like a reminder that whether you’re the most talented magician or an everyday striver, escapes can be the toughest acts to pull off.

Nothing about the overall trajectory of “Sleight” (which Dillard wrote with Alex Theurer) is going to surprise you. But then again, Dillard understands that the pleasure in familiar stories is in how enjoyable the journey is, and how involved the audience can get in the hero’s plight. And if you need to ignore that Bo’s problems could easily be solved by calling the cops, you do it as a gesture of good faith in Dillard’s ability to massage the pacing and tension.

It helps that he’s got a commendable visual style: his steady compositions and judicious use of the odd angle or visual splash recall the old-school suspense craft being deployed of late by Jeremy Saulnier (“Blue Ruin,” “Green Room”) and M. Night Shyamalan.

But Dillard also has a not-so-hidden ace in Latimore, a wonderfully open young actor with a high-beam smile and a promising future. He looks believably streetwise, but also sufficiently worried when coerced into holding a weapon. He’s charming when smitten (something Gabriel winningly gives right back), and thrillingly confident when deploying his carefully honed powers to manipulate the world around him.

And speaking of powers, Bo’s ability to levitate/move objects is not innocently faked, as an early shot of magnets, wires, batteries, and a gruesomely infected hole in his arm queasily implies. As this mildly fantastical element becomes accelerated in the final act, “Sleight” threatens to trade in its well-earned naturalist tension for the shallow highs of pulp fantasy. But Dillard wisely doesn’t overdo it, even meriting a conclusion that — like most comics-inspired tales these days — hints at the further adventures of his resourceful, determined hero.