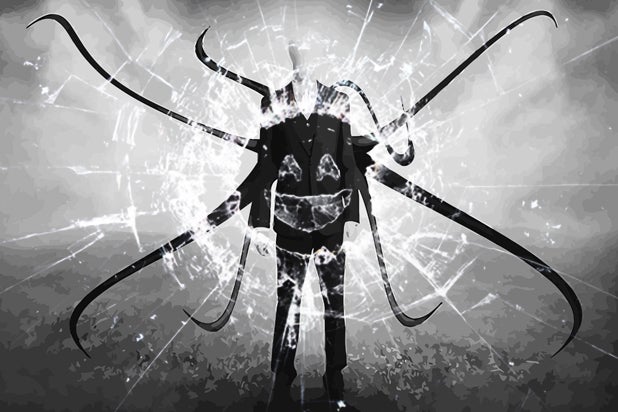 In 2014, two 12-year-old Wisconsin girls stabbed a classmate nearly to death — and said they did it to impress an internet creation called Slenderman.

How should the criminal justice system deal with children who can’t tell reality from the internet? It’s a question we think could provide the basis for a provocative “Black Mirror”-inspired story.

You can hear our pitch on the latest episode of “Shoot This Now,” the podcast where we talk about stories that should be made into movies. You can listen on Apple and Spotify or right here:

If you’re intrigued by the Slenderman case, you may want to watch the HBO documentary “Beware the Slenderman,” directed by Irene Taylor Brodsky, which focuses on the reasons the two girls, Anissa Weier and Morgan Geyser, lured their friend Payton Leutner into the woods and stabbed her 19 times.

The girls blamed Slenderman, a faceless, long-limbed demonic creature who originated in the world of creepypasta, an online type of horror fiction. (This wiki says the name is play on “copypasta,” described as “an internet slang term for a block of text that gets copied and pasted over and over again from website to website.”)

At the time of the stabbing, Weier and Geyser seemed unable to comprehend that Slenderman was not real.

In December 2017, Weier, who is now 16, was sentenced to 25 years under a mental health institution’s supervision. She pleaded guilty to second-degree attempted intentional homicide, party to a crime, but said she wasn’t responsible because of mental illness. A jury agreed, and found her not guilty by reason of mental disease or defect.

Earlier this month, Geyser, 15,was sentenced to spend 40 years under a mental health institution’s supervision.

She had told a court-appointed psychologist she continued to hear auditory hallucinations from an entity she called “Maggie” as recently as in the weeks before her Oct. 17 evaluation.

Geyser pleaded guilty last year to attempted first-degree intentional homicide, party to a crime. But she agreed to a plea deal in which the court found her not guilty by reason of mental disease or defect.

“I just want to let Bella and her family know I’m sorry,” Geyser said in court, using her nickname for Leutner. “I never meant this to happen. And I hope that she’s doing well.”

In the podcast, we explain that we don’t, to be perfectly honest, want to see a scripted Slenderman movie. The whole situation is too disturbing — more disturbing than anything on “Black Mirror.”

But we would be interested in a fictionalized story in the vein of “Black Mirror” in which a judge has to decide how to sentence a girl (or boy) who has been so desensitized by games, the internet or other media that she (or he) no longer feels empathy for real people.

Do we think that actually happens in real life? Maybe with very young children. After that, we’re not sure.

As we explain on the podcast, it seems to us that many supposing corrupted influences are just scapegoats for the real problem, which is mental illness.

Oh, and we haven’t even mentioned the craziest thing that happens on this episode of “Shoot This Now”: My co-host, Matt Donnelly, ever-so-casually mentions that he once lived in the home that Los Angeles serial killers the Hillside Stranglers used as a staging area.

If you like this episode, please do us the favor of tweeting about it, sharing it with your friends via message or email, or reviewing us. And check through our archive of much, much lighter episodes, about much less serious things.

And if you have an idea for a story that should be a film, TV show, or whatever, please tweet it to us at @TimAMolloy or @MattDonnelly) with the hashtag #ShootThisNow.

You can also tweet to @TheWrap, with the same hashtag. We’ll see it. Maybe we’ll even invite you to join us for a future episode.