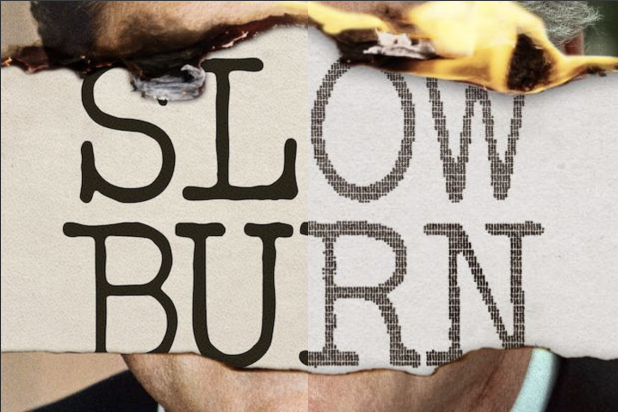 The “Slow Burn” podcast, which has covered Watergate and the Clinton-Lewinsky scandal, seems like a natural candidate to transition into a television show — and host Leon Neyfakh says it could happen.

On our latest “Shoot This Now” podcast, he tells us what episode of “Slow Burn” seems like the easiest to adapt to the screen. You can listen on Apple or right here:

“We’ve had some conversations with people, mostly on the TV side,” Neyfakh said. “Nothing to report yet, but I’ve always felt that there were… a bunch of different movies that could be picked out of these episodes.

He said one episode in particular, from Season 1, is “”the biggest no-brainer to me.” It involves a fascinating woman who could provide a complete different viewpoint into the Watergate scandal and President Nixon’s impeachment.

“She’s such a larger-than-life character that you can imagine really zooming in on her story and trying to tell the story of Watergate through her. Personally, I think it would work great,” he said.

But he also talked about tempering his expectations.

Both seasons of Slate’s  “Slow Burn” have focused on a presidential impeachment — Season 1 covered President Nixon’s fall, and Season 2, which is now underway, examines how President Clinton’s affair with Monica Lewinsky led to the start of impeachment proceedings that imperiled his presidency — before things took an entirely unpredictable turn.

Watergate, of course, has plenty of history on the big screen. It is the focus of the 1976 classic “All the President’s Men” and had a cameo appearance in last year’s excellent “The Post.”

The Clinton-Lewinsky scandal has proven less filmable, so far. In April, Ryan Murphy scrapped plans to devote a season of his FX series “American Crime Story” to a Lewinsky-centered storyline, saying he wouldn’t want to revisit the scandal without her participation.

“I told her, ‘Nobody should tell your story but you, and it’s kind of gross if they do,'” Murphy told The Hollywood Reporter. “If you want to produce it with me, I would love that — but you should be the producer and you should make all the goddamn money.'”

The History Channel abandoned plans for a Clinton-Lewinsky story soon after Murphy did.

And in an interview with “Shoot This Now” in August, “Better Call Saul” co-creator Peter Gould revealed that he once tried to make an HBO project that would have retold the Clinton-Lewinsky story… with shadow puppets. You can listen to that episode on Apple or right here.