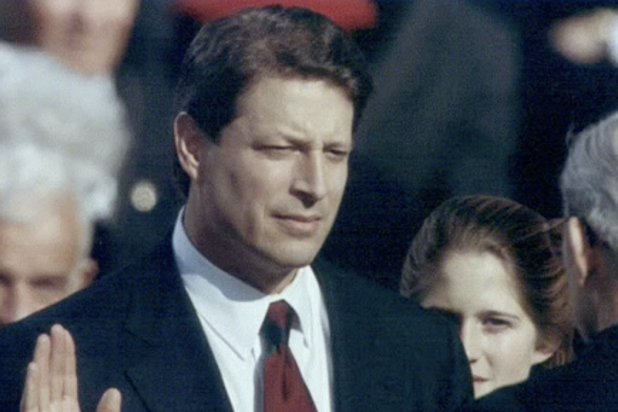 Leon Neyfakh’s “Slow Burn” podcast examines President Clinton’s desperate, legalistic attempts to hold on to the presidency after news broke of his affair with Monica Lewinsky. But would we all be better off now if he’d just handed over the presidency to Al Gore?

That’s one of the questions we ask Neyfakh in the new “Shoot This Now” podcast, You can listen on Apple or right here:

In 1998, many Democrats found themselves fighting hard to keep Bill Clinton in office, even if they were disgusted by his conduct. Clinton’s resignation would have felt like a massive win for Republicans.

But would it have been? Vice President Al Gore would have taken over as president, which would have given him the advantage of incumbency in the 2000 presidential election — one of the closest election in history. A swing of a few hundred votes in Florida would have left us with President Gore instead of President Bush.

Think of all the countless ways Gore’s agenda would have differed from Bush’s — on the environment, on taxation, on foreign policy. If we assume the Sept. 11, 2001 attacks would still have occurred under a Gore Administration, would Gore have invaded Iraq? There are interesting arguments that Gore would have and that he wouldn’t have.

I’m not sure. On Sept. 23, 2002 — months before the invasion — Gore criticized the Bush Administration’s ramp up to war, and predicted, interestingly, that if the U.S. did not commit to properly rebuilding Iraq after the invasion, “the resulting chaos could easily pose a far greater danger to the United States than we presently face from Saddam [Hussein].” You could argue that Gore was correct, given that ISIS rose up to replace Hussein. Whether ISIS poses a greater danger to the U.S. than Hussein would have is yet another area for debate.

The way one hypothetical leads to another is part of the fun — and frustration — of imagining realities different from our own. It’s impossible to guess how Hurricane Katrina, Iraq, the financial crisis and other historic events might have played out under a President Gore, if they would have occurred at all. (Hurricane Katrina, almost definitely would have happened; Gore was good on the environment, but probably not good enough to prevent a hurricane. So the question is whether he would have done a better “heckuva job” than the Bush Administration.)

A 2011 episode of the show “Community” introduced for a mainstream audience the concept of “The Darkest Timeline” — the worst of several possible realities.

It may seem futile, except as a thought experiment, to consider how our reality could have been different. But for people who think we now inhabit the Darkest Timeline, it can be comforting to indulge in what Neyfakh describes as the “liberal fantasy” of a President Gore. (During our “Shoot This Now” interview, I kick around the idea of a movie that would cater to this exact fantasy.)

But there’s greater value in trying to foresee potential long-term negatives born of today’s apparent wins. No piece of fiction illustrates this point more clearly than “Game of Thrones,” where every loss brings a win and every win a loss. It’s the best political show on television.

“Slow Burn” teaches the same lesson as “Game of Thrones” every time we recognize a character from Season 1 (Watergate) or the current season, Season 2 (Clinton-Lewinsky). “Slow Burn” can feel like an origin story for the likes of Roger Stone, Ann Coulter and Brett Kavanaugh. The breaking news of today rhymes unerringly with the scandals and cover-ups of old.

The past isn’t ours to change, but it is ours to learn from. Just ask President Gore.