On Thursday, theWrap’s Dominic Patten offered a guide for music fans who are going to this weekend’s Coachella Valley Music & Arts Festival, listing newcomers and vets and fresh faces and legends worth seeing over the course of three days in the desert.

They were all fine suggestions, to be sure. 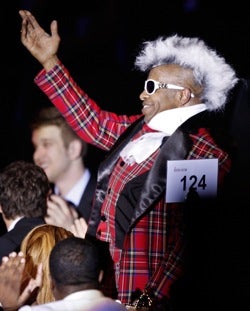 I just want to say one thing to anybody who sees Sly Stone’s name on the list, and thinks it’ll be cool to see the trailblazing soul, funk and pop musician at Coachella:

Be afraid. Be very afraid.

You see, Sly (right, in 2009) is not the most reliable guy. In fact, he might be the least reliable guy, ever, in the history of pop music. Which has a history chock full of unreliable guys.

Dominic mentioned this when he wrote, “it’s a sad fact that you never know if Sly Stone will show up.” But I think it deserves reinforcing.

So I’ll tell you a story, and then you can decide if it’s worth heading to the Gobi Tent on Sunday evening, or if you might not be better off sticking with, say, Spoon or Phoenix.

My story dates back to 1987, when Sly hadn’t done much of anything for years. He scheduled two nights at a little theater off Hollywood Boulevard. I covered it for the Los Angeles Times.

Sly was supposed to perform two shows a night, one at eight and one at 10. Opening night, stagehands were just beginning to set up his equipment at eight, and the handful of people in attendance shrugged it off: “It wouldn’t be Sly if he showed up on time,” said one.

(True enough: Sly was two hours late to his own wedding, which took place at Madison Square Garden.)

Sly reportedly arrived about 8:45, but some of his band didn’t. The audience veered between restlessness and bemusement. Somebody came onstage and recruited a guitarist and keyboard player from the crowd.

About 9:45, the audience started singing Sly songs on its own. Then the theater owner announced that there would only be “one long show” instead of two. He promised it would be “probably one of the best shows you’ve ever seen in your life.”

When people with tickets for the late show arrived, they found their seats occupied. The venue quickly switched from assigned seats to general admission. It still wasn’t close to being full.

At 10, Sly finally took the stage, resplendent in a pink sweatsuit and black fringed boots. He played for 26 minutes, fronting a terrible (and clearly unrehearsed) band and forgetting the words to his own songs. Then he said he was going to take a break for five minutes. “Maybe nine minutes at the most. Honest to God.”

He didn’t return for 36 minutes, during which the crowd sang “I Want to Take Your Higher” and “Dance to the Music” with significantly more fervor (and range) than the star of the show had exhibited. Then Sly came back and played for 16 more minutes. Plus, after some ticket-holders asked for their money back, a truncated three-minute stab at “I Want to Take You Higher.”

Total time elapsed: three hours, 37 minutes. Of which 45 minutes consisted of halfhearted performance, and two hours and 52 minutes of waiting.

Granted, all that waiting was something of a bonding experience for the couple hundred fans who showed up, including quite a few who ended up in the movie business. Dan Waters, who was writing “Heathers” around that time, was there. I still run into people who were part of the small, passionate crowd on that very strange night (and who probably remember it more vividly, and in a way more fondly, than they would a polished, professional show).

And hey, it was better than the second night of his two-night stand, when Sly was arrested for nonpayment of child support before he even got inside the building. The cops carted Sly off to jail, his backup band played instead, the theater refused to give refunds, and then the owner got in fight with a patron in the lobby.

Now, I’m not saying that anything like this is going to happen at Coachella. But I thought you should know.