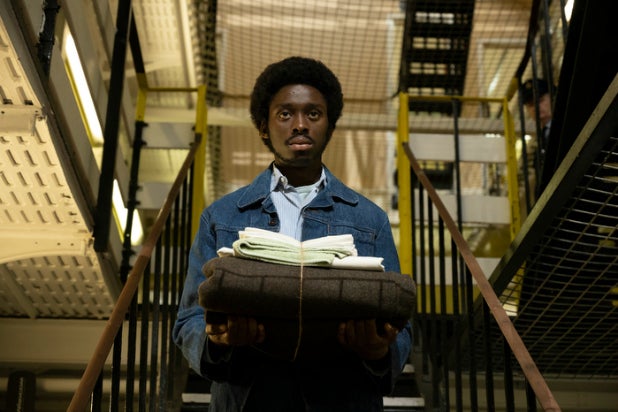 “You can’t look forward without looking back.” That’s a valuable piece of advice given to the protagonist of “Alex Wheatle,” but it’s also a summation of what director and co-writer Steve McQueen is doing with his extraordinary “Small Axe” series. (“Alex Wheatle,” the fourth of five titles, premieres on Amazon Dec. 11.)

With its vivid portrayals of the horrors of institutionalization, “Alex Wheatle” is perhaps most reminiscent — so far — of the McQueen audiences have come to know in films like “Hunger” and “12 Years a Slave.” (I have not yet seen the fifth and final “Small Axe” entry, “Education.”) But even as its lead character endures physical and psychological torment at the hands of authorities, the film is very much of a piece with the ebullience of “Small Axe,” as the ongoing themes of community, music and defiance play a huge role in the story.

The real-life Wheatle published his first novel in 1999, but the film begins in 1981, with Alex (Sheyi Cole, in his screen debut) going to prison for his role in the Brixton Riots, in which London’s Caribbean community fought back against the police who routinely terrorized the neighborhood. Through flashbacks, we learn that Alex is no stranger to the system, having been raised in foster care. He is routinely beaten and humiliated at the hands of an orphanage headmistress who’s right out of the pages of Dickens or Roald Dahl. (We hear the latter author in a radio interview as Alex finally ages out of the facility.)

When Alex arrives in Brixton, he’s a fish out of water in the neighborhood; neighbor Dennis (Jonathan Jules, “Fighting With My Family”) takes it upon himself to fix Alex’s wardrobe, hair and inability to speak the Jamaican dialect. “I’m not African,” Alex tells the barber who has referred to him as such. “I’m from Surrey.” Alex also insists to Dennis that the police are there to protect them, but a few run-ins with abusive cops politicize him, as does the reggae music that he devours from the local shop before becoming a musician himself.

But it’s the experience in jail — specifically, his relationship with Rastafarian cellmate Simeon (Robbie Gee) — that turns Alex’s life around. This fatherless man gets a mentor who not only opens his eyes to modern and historical oppression but also teaches him to control his anger and to find peace within himself.

In the same way that the “Small Axe” entry “Mangrove” rewrites the rules of the courtroom drama, “Alex Wheatle” doesn’t hit the usual beats of an author biopic. The film is set well-before the writing begins, but it leaves us with a full picture of the building blocks of a life and of a point of view. As opposed to a film like “Mank,” which contextualizes the creation of a specific work in its broader history and within the life of the writer, “Alex Wheatle” is more concerned with the circumstances and the personal growth that makes a writer a writer in the first place.

Newcomer Cole does extraordinary work, showing us the evolution of Alex from a somewhat dorky and clueless graduate of the system to someone who will be dedicated to improving and, when necessary, fighting that same system. His scenes with Jules, Gee and Elliot Edusah (“1917,” as a fellow foster care grad) capture a genuine sense of intimacy in a film that has no female love interest. (The romantic side of Alex is never addressed here, but in a brisk 65 minutes, McQueen and co-writer Alastair Siddons have plenty of other ground to cover.)

Also Read: 'Small Axe: Mangrove' Film Review: Steve McQueen Exposes the Police Brutality of the Past, and the Present

As with the other “Small Axe” titles, the production credits are impeccable, giving us neighborhoods and living rooms and nightclubs that feel period-specific and thoroughly lived-in. Editors McQueen and  Chris Dickens are tasked with maintaining a throughline as the script jumps backward and forward in time, but the transitions are always smooth and organic. (And kudos to Ronald Bailey and the sound department for the vivid mix of a moment I cannot begin to describe here, but you’ll know it when you hear it.)

In a year in which the line between cinema and television has been quite blurred, particularly when it comes to streaming platforms, there has been debate over whether “Small Axe” qualifies as a collection of movies or of TV episodes. Whatever people want to call it, it’s one of the great achievements of 2020.