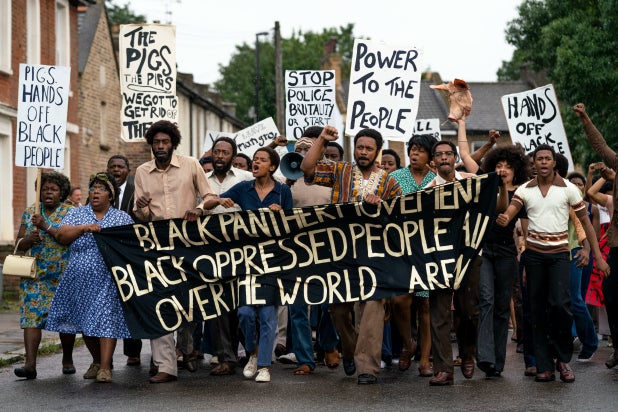 “Never count out an oppressed population” and “never count out a played-out genre” are just two of the notions that stayed with me after watching “Mangrove,” one of a five-part series of period films by Steve McQueen about London’s West Indian community.

It’s a movie about a real-life injustice followed by a courtroom drama, and if a long history of hacky biopics and feel-good activist cinema made you think this kind of story was beyond telling on film with power or efficacy, McQueen proves that there’s still a way to do it right. The tale of the Mangrove Nine was relevant in the late 1960s and early 1970s when it actually happened, it was relevant when McQueen and Alastair Siddons (“Tomb Raider” 2018) sat down to write about it, and it’s relevant today, tomorrow, and in the future, as unchecked police brutality continues to rain down on communities of color.

Like “Lovers Rock,” the “Small Axe” chapter that preceded “Mangrove” at the New York Film Festival, the film allows McQueen to unleash a previously-untapped gift for celebration and exuberance. The West Indian residents living in Notting Hill in 1968 might be facing regular discrimination and violence from the racist police, but they fully embrace life, whether it’s a jubilant celebration dancing in the street or the spicy curries being served up at the titular restaurant.

The Mangrove becomes a flashpoint of conflict between the community and those who allegedly protect them when the local police — led by Frank Pulley (a wonderfully villainous Sam Spruell, “Valerian and the City of a Thousand Planets”) — launch a campaign of harassment against the Mangrove and its owner, Frank Crichlow (Shaun Parkes, “Lost in Space”). They’ve ostensibly targeted Frank because of his shady past as a nightclub owner (and his current establishment’s crime of refusing to serve bland British food) but mostly as a larger pattern of making sure the local immigrants know their place.

After an anti-police demonstration turns violent, and Frank is arrested alongside eight other members of the neighborhood, the authorities decide to make an example of the Nine. Even though a lower court had thrown out the charges, the government comes at them with the very serious crime of incitement to riot, leading to a trial at London’s formidable Old Bailey (a building cinematographer Shabier Kirchner, “Lovers Rock,” very appropriately shoots in horror-movie mode).

“Mangrove” shifts gears smoothly into the courtroom, as it’s another area in which we see how traditional British propriety becomes both a shield and a cudgel in dealing with people of color and refugees, while championing the establishment – particularly the police – against all outsiders. And in the same way that the Mangrove Nine upended expectations and protocol in the court system, McQueen and his crew (particularly co-editor Chris Dickens, “Rocketman”) take the familiar trope of injustice on trial and inject it with fresh vigor.

Any worries that shaggy-haired white barrister Ian McDonald (Jack Lowden, “England Is Mine”) will become the movie’s White Savior are quickly dispelled when he supports several of the Nine — including “Black Panther” star Letitia Wright as real-life Black Panther Altheia Jones-LeCointe — in their desire to act as their own counsel, thus allowing them to cross-examine witnesses and to speak directly to the jury, rather than be shunted off to the side in the traditional manner of British courts.

This is a turning point in British civil-rights history probably better known in the UK than in the United States — I had to Google who Enoch Powell was, and why the “rivers of blood” speech was important — but for the most part, McQueen and Siddons provide enough information to make sense to those unfamiliar with these events without having characters dump exposition all over each other.

As with “Lovers Rock,” the period detail seems precise, and the music choices provide both energy and context. And even with so many characters on trial, the film finds time to include some nugget of empathy or specificity for each one. There’s a very telling moment between co-defendants Darcus Howe (Malachi Kirby, “Roots” 2016) and Barbara Beese (Rochenda Sandall, “Bandersnatch”), who have a child together; they’re both facing trial, but he makes it clear that he expects her to deal with their crying baby while he does the research for the hearing, and it’s a reminder that even in the most progressive and revolutionary relationships, activist women have often been called upon to do the same work as their male counterparts but, metaphorically, backwards and in heels.

It’s a consistently powerful ensemble, with Wright reminding us yet again that she has that indefinable something that makes a character actress a movie star. Whether she’s confronting the trial’s stuffy judge (Alex Jennings of “The Lady in the Van” as Edward Clarke) or community organizing with a group of Sikh trade unionists, Altheia burns with a fire for justice, and Wright knows how to capture that glow on camera. (Wright also knows just how to play the line “We have to have faith — faith in the British justice system” for the joke she intends it to be.)

This is a very British story, but it’s also universal. In an age where protestors face violent backlash just for making their voices heard, it’s important to remember, as Darcus tells Frank at one point, “The government will never take up its responsibility to you or this community, not unless it sees people on the street.”