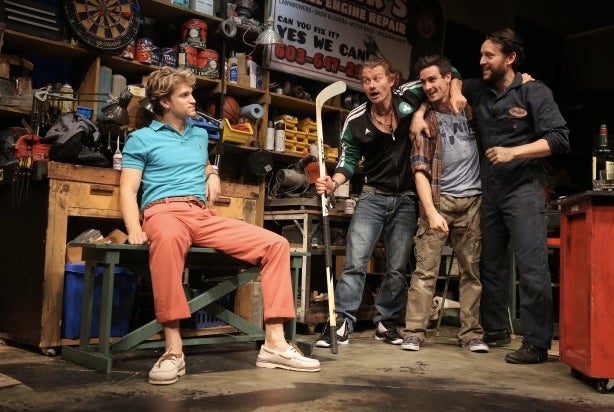 “Small Engine Repair” is a thriller for the social media age.

John Pollono’s play unfolds in a decidedly low-tech environment, an oil-specked repair shop, but the four men who gather there are spurred into immoral action by the internet.

“It undermines our empathy,” James Ransone, the actor best known for playing “Ziggy” Sobotka on “The Wire” and one of the play’s stars, said of social media. “There’s now a platform for all the inside thoughts we’ve always had and it’s become toxic. You look on a message board or you read a Tweet, and it’s just hate everywhere.”

The show is making its New York debut on Nov. 20 at the Lucille Lortel Theater and co-stars Pollono, Keegan Allen (“Pretty Little Liars”) and James Badge Dale (“The Lone Ranger”). The play received rave reviews for its drug-addled scenes of criminal behavior and narrative twists when it premiered in Los Angeles in 2011, with the Los Angeles Times hailing it as “…a psychological thriller worthy of Hitchcock.”

Ransone and Allen are both active on Twitter and say they have experienced people’s lack of social media graces firsthand.

“Being an artist, you have to have tough skin, because you’re told over and over that you’re not right for this or that role,” Allen said. “But it always hurts to read nasty comments, even when they’re not directed at me…I’ve seen horrible religious and racial bigotry that comes from cowards who are hiding behind a computer screen or a cellphone.”

Badge Dale, who admits he is not a social media savant, said he was drawn to the play for reasons beyond cruelty that comes in the form of 140 characters.

“It’s about women and men and the problems we have with intimacy,” Badge Dale said. “It’s about the way we treat women. These men are not heroes. They’re very damaged,  sad and incomplete people.”

Badge Dale, who said that he barely uses the internet, often found himself looking to Allen for guidance about the intricacies of Facebook, Instagram and other internet era forms of communication.

With its technological themes, abundance of four-letter words and partial nudity, the actors stress that “Small Engine Repair” is an NC-17 rated night of theater with a swagger and edge to match its Off-Broadway and Greenwich Village venue.

“It’s a fable for our times,” Ransone said. “It’s a morality piece that moves really fast. It’s not for the upper crust theater-goer. It’s for the average New Yorker. It’s very punk rock.”