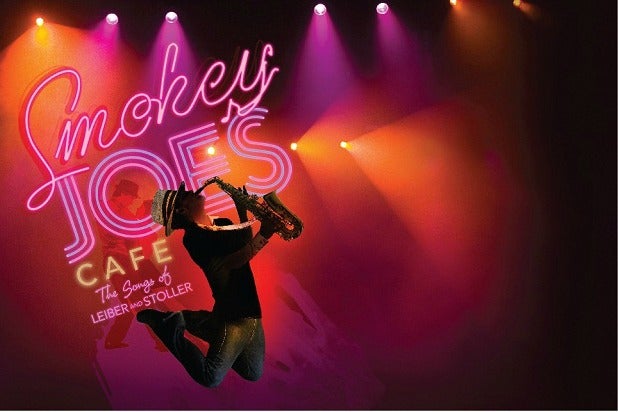 OK, I admit it. I grew up in Detroit and for my ears Motown music just sounds better than any other tunes. I often go straight to Smokey Robinson on Pandora when I am writing — just like right now as I compose this piece — and have blinders about any other music.

But as I become older, I have decided to expand my musical tastes and not be so rigid, even though I believe that the Motown sound is the best.

The first one is “Smokey Joe’s Café: The Songs of Leiber and Stoller,” which is being staged in a roundabout theatre at Arena Stage in Washington, D.C, through June 8 and presents a delightful evening of oldies and goodies.

Offering us the rock ‘n’ roll greats sung by Elvis Presley, the Drifters, and Peggy Lee, the talented ensemble of high energy actors sing and dance to such hits as “Jailhouse Rock,” “Hound Dog,” “Spanish Harlem” and “Stand by Me.” The fun musical evening is directed by Randy Johnson  and choreographed by Parker Esse.

Combining romantic duos with multi-cast portrayals this nostalgic show is so infectious one cannot help but take a second look at Elvis Presley, who seemed too country to me during my high school years growing up in Motown. I developed a new appreciation for his crooning. And when E. Faye Butler hit her high notes, you could not help but be impressed. Tony winner Levi Kreis dominates the musical numbers that are enhanced by the dancers being able to literally dance in circles.

For most of us “Hound Dog” has been associated with Presley. But in this play it’s sung by a female, and in listening to the words it seems much more appropriate. And sure enough blues singer Willie Mae Thornton known as Big Mama Thornton originally recorded it. It took a white singer like Presley to make it a hit but Smokey Joe Blues to bring it back to its roots.

“Stand by Me” has always been a favorite of mine so its rendition brought back tears of nostalgia and teenage crushes as well as recalling memories of its revival rendition in Rob Reiner‘s poignant movie by the same name.

A special treat on opening night was Rock and Roll Hall of Fame legend Stoller took a bow after the show ended. It was like he had walked out of memory lane and the audience gave him an enthusiastic applause. One can understand why it was the longest running musical revue in Broadway history. Guess we have to see how “Motown the Musical,” which is currently playing on Broadway, does. This is another play filled with great music that inspires people to dance in their seats.

I was also reeducated in my musical tastes by watching the TV show “Nashville,” set among the daily tribulations of various country-western singers trying to make it or attempting to stay on the top of their game. I could not believe that this show converted me; I not only look forward to watching it every week for the soap opera-esque stories but to hear the tunes.

Yes, I was the one who would make fun of others who listened to country-western music, especially if they had grown up in Motown like myself. But no longer: I have mellowed, or should I say have expanded my tastes. I knew I was hooked when for my last birthday I asked a dear friend to buy me “The Music of Nashville” on CD.

And now I play it along with my Motown tunes, Tracy Chapman, Bob Dylan and even a little Botticelli. Please, Temptations, forgive me. And I guess to Smokey Robinson I have to say it took another Smokey –“Smokey Joe’s Café” — and a television hit to broaden my musical tastes.

Aviva Kempner is the co-director of "Imagining the Indian: The Fight Against Native American Mascoting" documentary. Jessie Atkin is the communications coordinator for the documentary.