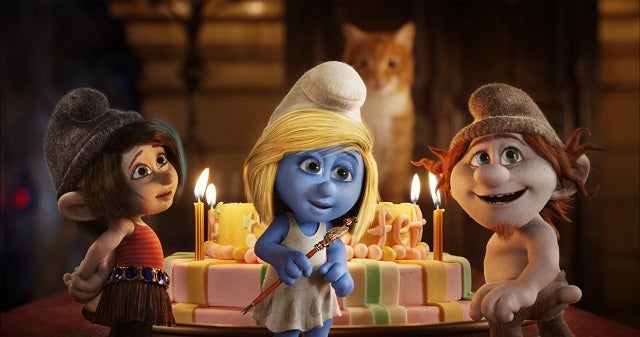 Sony’s kids movie “The Smurfs 2” hit the ground running Wednesday, taking in an estimated $5.2 million domestically and finishing No. 1 at the box office in its first day of release.

That puts the 3D live action-animation mash-up on pace for a five-day opening-weekend total of more than $30 million. First-night audiences gave it an "A-" CinemaScore, a good sign for word-of-mouth.

The original “Smurfs” movie opened to $35 million in July 2011 and went on to take in more than $560 million globally. The majority of that came from overseas, and the sequel is expected to make most of its money abroad, as well.

Early reports also had “The Smurfs 2” opening to an estimated $1.4 million Wednesday in the U.K., one of 42 foreign markets in which it will debut this weekend. Sony is hoping it can match the $420 million the original film took in internationally.

The PG-rated “Smurfs 2" is in 3,866 theaters in the U.S. The weekend’s other wide opener, the Denzel Washington-Mark Wahlberg action comedy “2 Guns,” will be in more than 2,800.

Last week’s No. 1 movie, Fox’s “The Wolverine,” took in $4.7 million Wednesday and was second. Horror film “The Conjuring” was third with $2.6 million.