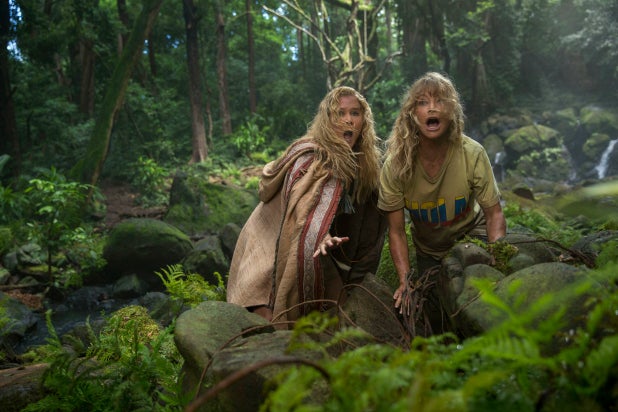 The Amy Schumer-Goldie Hawn comedy “Snatched” should really be called “Amy and Goldie Go to Ecuador” and be one in a churned-out series like the “Blondie” movies of the 1940s. That kind of context might help this sloppy, fitfully funny trifle go down easier than it does now, shouldering the mantle of summer event comedy, eagerly awaited follow-up to Schumer’s breakout hit “Trainwreck,” and return after a 15-year multiplex hiatus for screen legend Goldie Hawn.

The build-up felt formidable: the promise of a zeitgeisty, unapologetically raunchy stand-up comic and a screwball icon taking the female buddy comedy to the “enne”-th power. But what we’ve gotten in “Snatched” is an uninspired, scattershot disaster romp that mostly serves the talents of one half of the marquee pairing, underuses the other half, and struggles to blend R-rated humor, foreign misadventure, and oil-and-water mother-daughter dynamic into a cohesive diversion.

There are plenty of worse comedies out there, but “Snatched” has that vexing air of disappointment to it.

Watch Video: Amy Schumer and Goldie Hawn Have Got a Gun in New 'Snatched' Trailer

It also feels like three movies stitched together with hectoring and vagina jokes. The first is a snicker-worthy if tepid urban dating comedy that could just as easily have been a chunk on “Inside Amy Schumer.” As self-centered Emily, fired from her retail job and dumped by her disengaged rock n’ roll boyfriend (Randall Park) right before their planned vacation to Ecuador, Schumer is in familiar territory here, mining social embarrassment and misplaced ambition for queasy laughs. (Though it stretches credibility that even someone as clueless as Emily would not ask for time off from even a job she hates, as a joke establishing cluelessness, Schumer knows how to sell it.)

Emily’s last resort for licking her wounds is decamping to her mom’s, with the expected judgment and frustration that entails. A onetime wild girl forced to become a single mom, Linda (Hawn) is now a cheery shut-in with lots of cats, an agoraphobic manboy for a live-in son (Ike Barinholtz), and a fear of what lies outside her suburban home. Emily hasn’t always been on the best of terms with her, but desperate for a South American plus-one, she begs her mom to go, and in the interest of repairing a fractured relationship, Linda accepts.

Also Read: Can 'King Arthur' or 'Snatched' Dethrone 'Guardians of the Galaxy Vol 2' at Box Office?

Movie number two emerges, which is a predictable fish-out-of-water lark in sunny environs. Linda, swaddled in clothes and suspicious of everyone, can’t relax at their fancy beachside resort, while Emily is ready for anything, especially after meeting a handsome, flirtatious stranger (Tom Bateman) at the hotel bar. After he escorts her to a nighttime forest bacchanale of drinking, dancing and Capoeira, he offers to take Emily and her mom on a culture-expanding excursion the next day.

The trip is a trap, however, and the women are summarily kidnapped, thrown into a dingy cell, and held for ransom by a ruthless sort named Morgado (Oscar Jaenada), who — if we’re keeping tabs on Hollywood’s representation of foreign lands — is the first native character, and one of the only ones, with more than three lines.

What follows, once the women escape and must fend for themselves in the wilds of the Ecuador-Colombia border with a vengeful captor on their tail, is the third movie inside “Snatched,” a sputtering “Outrageous Fortune” update that you wish had more of the fleet, funny, even emotional crackle of “Romancing the Stone.”

Director Jonathan Levine (“50/50,” “The Night Before”), no visual stylist, seems truly lost when the canvas of Katie Dippold’s string-of-hazards screenplay grows from the usual two-person shticking — including a frequently returned-to gag in which Emily’s distraught brother repeatedly calls a disinterested State Department employee (Bashir Salahuddin) — to include wacky doings (chases, killing, forced ziplining) in exotic locations. “Snatched” seems almost afraid of taking on any breadth or scope, or evoking anything like real peril.

The biggest casualty on that front is how thinly drawn Hawn’s character is, and how weakly the issues between Emily and Linda play out when “Snatched” takes a breath between mishaps to find real feeling. Schumer has plenty of room to mine Emily’s many faults for uncomfortable laughs, and even genuine hurt as an emotional mess looking for respect rather than evaluation in her mother’s eyes. (She was similarly affecting in “Trainwreck”‘s daughter scenes.) But it’s a one-sided affair, with Hawn hamstrung by “told you so” reactions and displays of matriarchal strength that any actress her age could pull off.

Considering this sun-kissed Oscar winner’s ’70s-’80s heyday at the forefront of fizzy movie comedy, it’s surprising she gets hardly any chances to turn Linda into her own agent of silly mayhem. Though you can see real fondness between the veteran and the up-and-comer as they go through the motions of frazzledness and reconciliation, “Snatched” doesn’t do their matchup any favors.