“Saturday Night Live” took a couple of weeks off during what turned out to be an eventful period of time, newswise, so you’ve probably already guessed that the “SNL” cold open sketch for the April 2 episode tried to cover, well, all of them.

But rather than a targeted mock session or direct parody of, say, the one thing everyone has talked about for a week — Will Smith slapping Chris Rock at the Oscars — the show decided to do a really basic “Fox and Friends” parody instead, recapping the news but not really commenting on anything.

It started with the “SNL” version of the “Fox and Friends” crew talking about Donald Trump’s failing social media company and then about Ted Cruz. Then came Keenan Thompson as Clarence Thompson and Kate KcKinnon as his seditious wife Ginny. 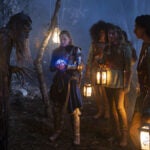 Also Read:
Disney+ Puts the Fate of a Kingdom into Contestants’ Hands in New Competition Series ‘The Quest’

First, Thompson’s Thomas denied having had COVID. Then they brought up Ginny Thomas’ participation in the events of Jan. 6, 2021. It was mainly notable for Thompson’s Thomas refusing to answer any direct questions about his apparent corruption, though there was a fun moment where McKinnon’s Ginny went full QAnon, saying “All I want is a tidal wave of biblical vengeance to wash away the Biden Crime Family… and then we will release the Kraken.”

Then Cecily Strong’s parody of Jeanine Pirro showed up for some brief references to recent news, followed by the usual joke that her version of Pirro is constantly Drunk.

Finally James Austin Johnson showed up to do the Trump impression, and as has unfortunately been the case lately, it was wackier than it was biting and kind of got bogged down by the whole Stream-Of-Consciousness version of Trump, who can’t seem to understand that his “Fox and Friends” friends are trying to help him deny that he attempted to overthrow the 2020 election.

Overall, it was fairly amusing, and we’re always able to enjoy Johnson’s incredibly spot on Trump impression, not to mention Strong’s just whole awesome comedy vibe. But it would have been nice if the return of “SNL” after a couple weeks off had a bit more teeth.