In typical “Saturday Night Live” fashion, there were more celebrity cameos than just the host and musical guest on the latest episode. And that included Dionne Warwick — who not only got to meet her spoof self, but sing with her too.

During the show, Ego Nwodim brought back her impression of the singer and television host, once again interviewing a slew of celebs played by SNL cast members. Nwodim’s Warwick asked hilarious, nonsensical questions — like if Cardi B only uses the B because there was another Cardi in class — to Chloe Fineman’s Miley Cyrus, Pete Davidson’s Post Malone and actual Ed Sheeran (this week’s musical guest), among others.

Naturally, she laced in a few songs along the way, which actually prevented her from getting her COVID booster shot. Eventually though, she got tired of talking to young celebs she’d never heard of. 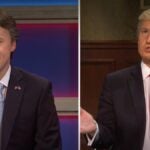 “You know, I am sick and tired of interviewing people who are not icons,” fake Warwick lamented. “Please welcome…me!”

“My darling, I am not perfect,” actual Warwick answered. “I am just very, very good.”

Warwick also poked fun at her own Twitter activity, which fans have come to cherish for her love of other celebrities and gradual learning of pop culture phenomenons and idioms.

To wrap the sketch up, the two women blessed fans with a duet — though actual Warwick did question if they deserve it — singing “What the World Needs Now is Love.” Nwodim mostly let Warwick take the reigns on vocals but was clearly enjoying every second of being up there with her.

You can watch the number in the video here and above.