This week’s episode of “Saturday Night Live” finally addressed the buzziest show on Netflix at the moment, “Inventing Anna.” And the comedic spin on the series was well worth the wait.

Not quite a parody, the video opens with “SNL” cast member Chloe Fineman watching “Inventing Anna” in her dressing room and realizing Anna Delvey – the true-life subject of the Netflix series – got what she wanted by being demanding.

This inspires Fineman to try out Delvey’s approach, but it goes a bit beyond standing up for herself. Cut to the next day and Fineman is wearing the Anna Delvey glasses and speaking with her odd accent. She sees fellow cast members eating chips in the break room and demands, “We need something more exclusive. More VIP. Like Nobu.” 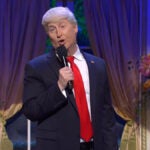 She tells Kyle Mooney she’s taking his couch, tells James Austin Johnson she’s doing Biden now, and she walks up to Michael Che at the Weekend Update desk and says, “Lorne says I host Update now,” to which Che responds, “Alright bet” and immediately leaves with a suitcase in tow.

There’s even a bit in which she tells Oscar Isaac he looks “poor,” although with her Anna Delvey accent it takes several tries for Isaac to understand what she’s saying.

The sketch ends with Kate McKinnon confronting Fineman and saying, “I can’t help but notice you’ve been Delvy-ing everyone today.” Fineman apologizes and takes off the glasses, only for McKinnon to put the glasses on her own face and say, “There can only be one Delvey around here.”

“Inventing Anna” chronicles the real-life story of Anna Delvey aka Anna Sorokin, who pretended to be a wealthy heiress and deceived a number of New York institutions. The Netflix limited series hails from “Grey’s Anatomy” creator Shonda Rhimes and dramatizes Delvey’s rise and downfall.

Watch the sketch at the top. 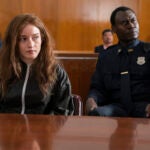