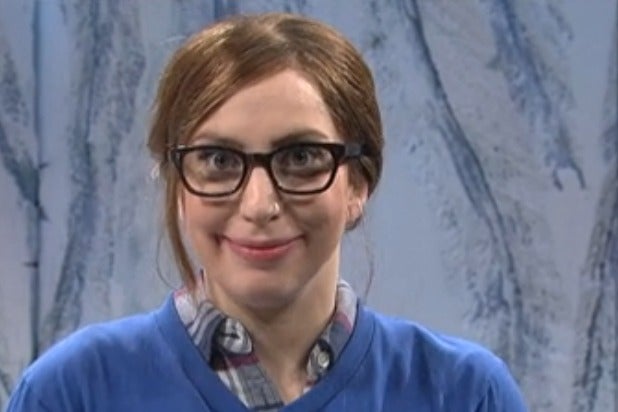 Lady Gaga is not afraid to pander to audiences for applause.

In fact, the 27-year-old New York native even sang about it when she pulled double duty as the host and musical guest on “Saturday Night Live” this week.

Dressed in a sparkly chorus-girl inspired mini, Gaga changed the lyrics to her chart-topper “Applause” and instead belted out a jazzy version of “Cheap Applause.” Proving her point further, Gaga asked the audience to clap for the ladies, out-of-towners, ending childhood obesity, teachers, New York firefighters and subway perverts.

That came later in two different sketches. First, Gaga poked fun at her infamous fashion risks when she played an Apple store genius in a Kanye West and Kim Kardashian sketch.

“I don’t care about fashion,” said a nerdy Gaga, arching her eyebrows at the camera for dramatic effect. “I think people who try too hard with their outfits are maybe hiding something.”

Embracing the self-mockery vibe, Gaga further ribbed herself for the undeniable similarities between her “Born This Way” and Madonna’s “Express Yourself” in a bad covers sketch.

Sadly, Gaga’s humor and best attempts at self-deprecation died after the “Born This Way” nod and she was wasted in the second half of the show — Gaga as a stage mom and Gaga as an elderly Gaga — much the way writers have wasted previous hosts in the second hour this season (see Kerry Washington, Tina Fey and Edward Norton).

That is unless you count Gaga’s “Do What U Want” duet with R. Kelly, which was hilarious but it’s unclear if that was intentional or not. The number included a woman whose sole purpose was to take Kelly’s sunglasses along with dry-hump sexual simulation/push-ups between Gaga and Kelly that was nothing short of silly.

The night’s best spoofs, such as second-term strength Paxil for President Barack Obama and the cold open, didn’t involve Gaga at all. But that’s not Gaga’s fault. She, like “Scandal” star Washington before her, did the best she could with what she was given. For instance, she almost made the kid acting skit funny. Too bad she wasn’t given more. Like wouldn’t it have been great if Gaga would’ve given her new found enemy Perez Hilton his comeuppance? Hilton sure didn’t waste the chance to get in a dig on Twitter while the show aired on the east coast.

Instead, Gaga had to do all the heavy lifting with her voice but boy, did she sound great.