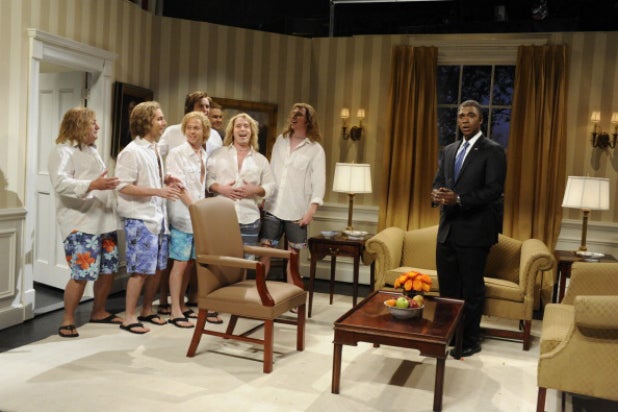 “Saturday Night Live” is running out of reasons not to have an African-American woman in its cast.

In the face of growing criticism that it hasn’t had an African-American woman in its cast since Maya Rudolph‘s exit as a full-timer in 2007, producers owned up to the oversight Saturday in a skit that found guest-host Kerry Washington playing Michelle Obama, Oprah Winfrey, and almost Beyonce.

But the diversity problem doesn’t begin or end with “SNL.” Lorne Michael’s iconic show is only one rung in a comedy ladder that often starts in improv theaters or on stand-up stages.

And they aren’t celebrated for their diversity, either. Which means Michaels is looking for a small pool of African-American women within an already small pool.

“You can’t just say, ‘OK I need a black person,'” said Charna Halpern, co-founder of the iO Theater in Chicago, which spawned four current  “SNL” castmates. (See inset.) “I think people don’t understand how tough it is to find the right person for that show. I’m sure he knows he needs a Michelle Obama.”

Halpern said she suggested Michaels look at two African-American women from her theater before the current season of “SNL.”

“Years ago, the number of black people that came here was very small,” Halpern said. “A number of years ago, I didn’t have women.”

But the improv world that feeds the “SNL” cast is changing. The Upright Citizens Brigade Theater — which produced four of the show’s five newest cast members — has had an aggressive diversity program in place since 2009 that offers free tuition, practice sessions, and other programs to bring new faces into the improv fold.

See photos: ‘Saturday Night Live’s’ Not So Colorful Past: A History of Its Diversity

Keisha Zollar became the New York UCB Training Center’s diversity coordinator in 2009, and is among the African-American women whose names have come up for “SNL.” But even Zollar says she left improv at one point because she sometimes felt left out.

“I actually felt isolated being a woman of color,” she said. “I dropped out for a little bit and did my own stuff.”

She says there are many reasons improv can feel unwelcoming to people who don’t fit in with the norm — and they aren’t about racism.

“Improv is hard,” she explained. “And I think one of the things that happens with a lot of institutions is that when things get hard, people lean into their cultural norms subconsciously, without thinking about their behavior.”

The recession didn’t help, she added.

“Tougher economic times tend to push out diversity,” she said. “People make safer decisions when money’s tight. … It’s a fact in America that Blacks or Latinos make less than their white counterparts. It would also be false to deny that women make less money overall.”

There’s no getting around the fact that improv is very white and male. Walk into most improv theaters, from UCB in New York and Los Angeles to the iO in Chicago to The Groundlings in Los Angeles, and you’ll see a lot of white guys in their 20s and 30s.

There are more than 300 performers and alums on the UCB New York’s cast page. The faces are becoming more varied. But even after four years of UCB’s diversity program, only a few of them belong to African-American women.

Michaels has said he wants more African-American women. But where should he look?

Kenan Thompson was widely derided in October for saying that “SNL” has trouble finding African-American women “that are ready.” But his comment speaks to a lack of diversity in the comedy realm overall. NBC declined to comment about the issue to TheWrap and Michaels was unavailable for comment.

Meanwhile, improv schools and theaters are diversifying themselves.

UCB New York’s training center started off giving scholarships that covered the costs of 16 recipients taking four levels of classes, which now cost about $475 each. The program has expanded to offer 70 free classes, twice a year, and will soon increase to 90 classes.

Erik Tanouye, the school’s director of student affairs, says more diversity leads to better comedy. His father is Japanese, though he said people don’t always realize he is part Asian. So he’s winced through a few scenes in classes he’s taught in which people have looked for laughs in stereotypes.

That’s bad in two ways: It disappoints or offends students whose backgrounds are being stereotyped. And it’s just bad improv, Tanouye said.

“You’ll see students who are new to improv doing characters that are not accurate reflections of how people behave,” he said. “I think that it weirdly happens less if a person from that ethnicity is there.”

UCB wants to feature people from all backgrounds — the diversity program seeks people of color, as well as those who are older, LGBTQ, or differently abled — with the idea that more diversity leads to better comedy.

The goal is that diversity will provide a richer background — without a person’s background becoming the joke. It’s a philosophy neatly epitomized by ex-“SNL” castmember Bill Hader’s Stefon character. Stefon is gay, but the joke isn’t that he’s gay. He’s such a thoroughly strange person that his crush on Seth Meyers might be the most relatable thing about him.

Many people think of improv as the competitive games they see on “Whose Line Is It, Anyway?” But the long-term improv taught at most schools is about introducing believable characters and finding the humor in their very human behavior.

Stereotypes don’t make sense, because they are anathema to real human behavior.

Improv’s whiteness may go back to its roots, said Tanouye. It was born largely out of the white, college-aged Compass Players, which included Mike Nichols, Elaine May, and godfather of improv Del Close.

Close’s improv students include “SNL” vets Dan Aykroyd, John Belushi, and Amy Poehler, one of UCB’s founders. Before he died in 1999, Close also co-wrote the improv Bible “Truth in Comedy” with Halpern. It eschews the kind of broad characters in stereotype-driven brands of comedy.

In the end, “SNL” will become more diverse when America becomes more equal, said Zollar. But she isn’t waiting. Besides performing at UCB and the People’s Improv Theater and appearing on the second season of “Orange Is the New Black,” she’s starring this weekend in a one-woman show, “The Joyful Nihilist.”

“Whether I get put on ‘SNL,’ or not, I’m never going to stop doing this,” she said. “Nothing’s going to stop me. And if I get a larger platform, I’m going to open the door for as many people as I can.”