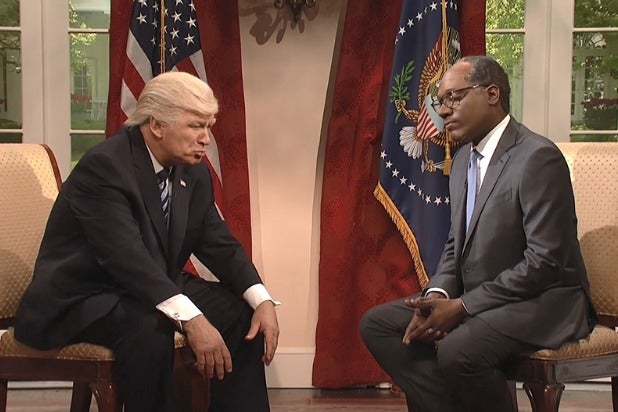 “SNL” repeatedly saw some of its best ratings in years in its just-ended Season 42, and there’s a good reason for that. Each week, “Saturday Night Live” felt like more than a dose of comedy. It was a way to get a sanity check on what continues to feel like a constant barrage of absurd political news.

It’s nothing new to see “SNL” cover politics, but through the 2016 presidential race and beyond into the Trump presidency, the show served a different function. Tuning in each week to see how “SNL” would pull comedy out of each week’s news helped confirm a consistent saying in 2017: “This isn’t normal.”

In a big way, claiming the doings of the Trump administration aren’t business as usual is a massive understatement. “SNL” had an insanely target-rich environment, with everything up for grabs from Donald Trump’s often-bizarre Twitter rants, to his comments about sexual assault and history, to his administration’s openly hostile relationship with the press, to his statements that can’t stand up to factual scrutiny.

The show had a glut of things to choose from — and a few times, it couldn’t pull any more comedy out of what had happened in real life. If anything, the politics of 2016 and 2017 have been difficult to parody because they’re already ridiculous.

But beyond just taking a few of America’s leaders down a peg, itself nothing new in comedy or on “Saturday Night Live,” the show’s frequent appearances by Alec Baldwin as Trump were necessary perspective. Since Donald Trump took office, the trickle of head-scratching moments coming out of the American political system has turned into a deluge. And each week, “SNL” picked out a few news items from the flood, an acknowledgement that the things many in the rest of the country were questioning were, in fact, worth a second look.

Baldwin only hosted one episode this season, but he appeared on the show again and again to play Trump in a variety of sketches. The appeal wasn’t just to see what jokes “SNL” might make about Trump — it was to see what elements of real-life political discourse would make the cut.

Again and again, “SNL” brought the goods. The show nailed Trump for his infamous “Access Hollywood” tape, on which he said he could sexually assault women because he was famous. It skewered him for his reportedly sharp and combative calls with world leaders. It slammed him on his awkward defense of former Fox News host Bill O’Reilly, himself at the center of a sexual harassment scandal. And it parodied Trump’s strange press conference and the release of a reportedly leaked intelligence file showing Russia had compromising information on Trump — as Baldwin put it, “the pee-pee” tape.

The most inspired moments, however, were the ones in which “SNL” turned its aim to those around Trump. Melissa McCarthy blew the doors off the season with her surprise guest appearance as White House Press Secretary Sean Spicer, taking his harsh dealings with the press in daily briefings far over the top — and in so doing, making sure everyone was aware of the reality. A faux Transportation Security Administration video trashed Trump’s ban on travelers from seven Muslim countries, which still hasn’t passed constitutional muster. And the fake trailer for a movie perfectly lampooned Trump’s party by celebrating the Republican that eventually stood up to him — the subject of which was “TBD” because no Republicans had actually done that.

Each week, “SNL” didn’t just serve the role of being a funny cap to the week. It put a lens on the real news that served to highlight it. As events like the Women’s March found people across the country trying to fight what they see as Trump’s harmful agenda, “SNL” chimed in by trying to make funny the daily absurdity. It helped to make the criticisms of millions feel legitimate.

For all that work, “SNL” Season 42 is a standout. The show acted as a release valve for people who are genuinely worried about Trump’s policy goals, the way he deals with world leaders, and his plain disregard for ethics and the truth. And it was an incredibly helpful reminder: no, you’re not crazy; no, this isn’t normal.