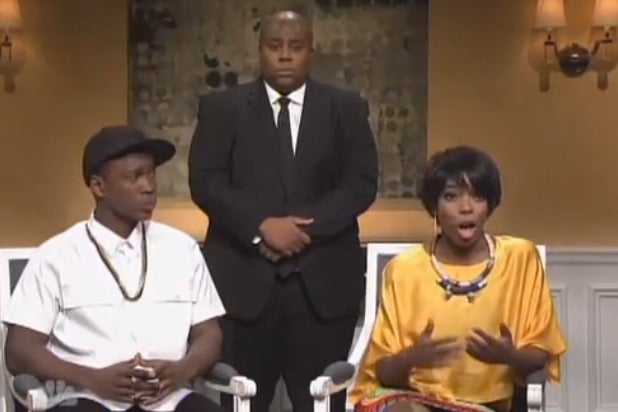 Depending upon who you ask, “Beygency” is the funniest thing to happen to “Saturday Night Live” this season.

That is until the comedy sketch show this weekend brilliantly parodied Solange’s now infamous elevator assault against her brother-in-law Jay Z.

The cold open — which featured Jay Pharoah as the rapper, Sasheer Zamata as Solange, Kenan Thompson as a skittish bodyguard and a hilarious cameo from former “SNL” star Maya Rudolph as Beyonce — was full of unforgettable punch lines and ribbing. This includes the “lost” audio from the elevator that explained that Solange wasn’t attacking her sister’s husband. No, she was simply knocking off a spider on his shoulder over and over again.

Rudolph wasn’t the only alum to return for the finale. Golden Globe winner Andy Samberg came back to host the 39th season finale two years after leaving the show. The “Brooklyn Nine-Nine” star kicked off the night with a joke about appearing in 100 digital shorts and only six live sketches during his seven seasons on “Saturday Night Live.”

His opening monologue also included fun cameos from other one-time cast members Seth Meyers, Bill Hader and Martin Short. Samberg even attempted to top the number of impersonations Hader had done during his stint on “SNL,” by lampooning everyone from Paul Giamatti to Alf. But in the end, Hader came out and did a couple more impersonations and held onto the record.

Sadly, the cold open, Samberg’s marathon of impersonations and his turn as Nicolas Cage on “Weekend Update” later proved to be the comedic high points of the night.

The rest of the sketches were laugh-deficient at best. This includes the one about an inappropriately affectionate family watching the NFL draft its first openly gay player, Michael Sam. Despite welcomed appearances by “SNL” alums Kristen Wiig, Fred Armisen, Hader and Rudolph, the bit was heavy on the silliness and light on wit.

Even Samberg’s two digital shorts — one about a DJ who makes his fans explode with delayed bass and a Lonely Island music video about hugs — felt forced.

Through it all, Samberg, the returning cast members and guest stars Lil Jon, 2 Chainz, Paul Rudd and Pharell Williams looked like they were having a blast. Shrug. At least somebody was.

Digital Short “When Will the Bass Drop?: