During the second sketch of the night on “SNL,” Aidy Bryant, Cecily Strong, Ego Nwodim and Holly Gardner played the hosts of a fictional “View”-like show called “The Talking,” only for a doctor played by host Owen Wilson to appear and conduct a COVID consult live on-air.

When asked if the discussion has to occur on TV, Wilson’s doctor replied, “It has to be on TV for HIPAA reasons — we either can’t tell anybody or have to tell everybody.” He then pulled Gardner’s character off the air, only to return and perform contact tracing with Bryant’s character (aptly named Moony Talkin’). 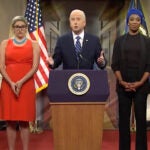 “The bad news is one of you ladies also tested positive,” Wilson’s character says. “But I understand you’re on live TV so I’m just gonna be discreet about this. I think I’m just gonna put my hand on the person who has COVID.”

After pulling Bryant’s character off the set, the remaining two hosts stress “how many times we’ve all been vaccinated,” only for the button of the sketch to reveal they were all false positives.

The sketch was inspired by the Sept. 24 episode of “The View” when co-hosts Ana Navarro and Sunny Hostin were informed they had tested positive for COVID-19 and abruptly pulled off the set moments before they were due to interview Vice President Kamala Harris.

The move was widely reported, and co-host Joy Behar had to inform the audience why Navarro and Hostin were now absent. The interview with Harris continued, but with the Vice President conducting her side of the interview from a secure room elsewhere on the sound stage so as not to potentially expose her to the virus.

Watch the entire sketch in the video above.