Sammi “Sweetheart” Giancola may have declined the invitation to return to MTV for “Jersey Shore Family Vacation,” but her castmates weren’t going to let her off the hook that easily.

Pauly D showed up to the cast’s Miami vacation home with a truly horrifying surprise: a Sammi doll sporting a “I’m in a really good place right now” shirt that would recite some of her famous catchphrases (“Ron stahhhp”).

The doll was a so upsetting that a running storyline through the two-part premiere focused on Nicole “Snooki” Polizzi’s various attempts to murder the thing, from strangling it in the living room to stomping on its head outside to, ultimately, drowning it in the pool.

“We hated it! It was so creepy,” Snooki told TheWrap during a post-premiere interview. “That doll was like 200 pounds … [And] I think it was a sex doll, because it had, like, a vagina. It actually had a part. It was disgusting.”

Reuniting with the rest of her human castmates, on the other hand, was a “blessing,” a chance to catch up with old friends after spending a few years getting married, starting families and settling down.

“I just missed the roomies, the whole feeling of the show in general,” she said. “I was just really excited to be with them again. And I’m a full-time mom. I never go out, I never do anything fun, so this was kind of like my escape.”

TheWrap: What was it like for you to come back to this show after all this time?
Snooki:
I think we were just overall really grateful for the experience. In reality, in this business, you don’t get a second chance with a show like that. And that’s why we went so hard and so crazy, just to celebrate that it was happening. Getting back together was literally like a blessing.

What were you most excited for coming back?
I guess I just missed the roomies, the whole feeling of the show in general. I was just really excited to be with them again. And I’m a full-time mom. I never go out, I never do anything fun, so this was kind of like my escape.

The audience seemed just as eager to see the show again. Why do you think that is? What makes “Jersey Shore” such a hit, even after all these years?
I just feel like they relate to us. They enjoy us being hot messes. We basically put us all out there. I feel like it’s just this good guilty pleasure we’re giving our fans.

Let’s talk about Sammi a little. Her absence seemed to be a big point of contention with the group in the premiere. What was your reaction to hearing she didn’t want to participate?
I think at first we were all upset. We were all thinking, “We can’t do this reunion without everyone. Everyone needs to be involved, it’ll be weird if she doesn’t come.” But then we don’t want to force her, either. We don’t want her to come and not be comfortable and not be miserable. [Given] the fact that she wasn’t into it, it was good that she didn’t come — it wouldn’t have benefitted anyone. I’m bummed that she wasn’t involved, but we still did it [laughs]. 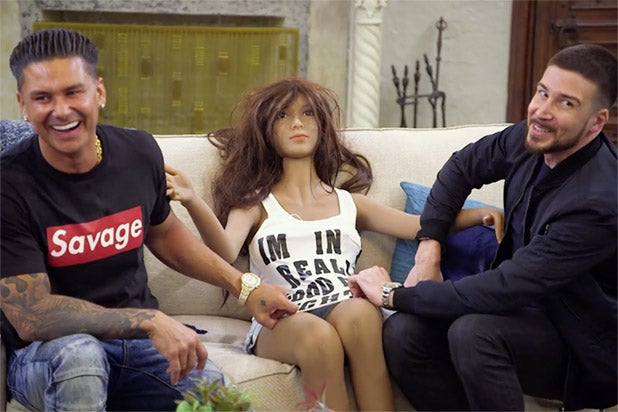 I have to say, that doll is one of the creepier things I’ve ever seen on television.
Oh my god, yeah.

And you trying to drown it was hilarious.
Ugh. We hated it! It was so creepy.

Do you know how Pauly got it to Miami? Did he buy it a seat on the plane or something?
Actually, I’m pretty sure he told the producers to get it, so it was there at the house already and he just brought it in. That doll was like 200 pounds. It wasn’t easy. I think it was a sex doll, because it had, like, a vagina. It actually had a part. It was disgusting.

Did you ever feel guilty, like we’re all having a laugh at Sammi’s expense?
At first, we were like, “Oh my god, this is terrible.” But at the same time, if she was there, it wouldn’t have happened. So it’s like, this is what happens when you don’t come.

Deena made a good point that there might be some unresolved issues there with Ronnie.
I can see where she’s coming from. I mean, who wants to live with their ex? If she’s finally happy and in a good place, like she says. So we get that, but the opportunity is insane to pass up, to the rest of us. We just wish that she did it. The girls would’ve had her back, we would’ve took her out. We could’ve made it work. 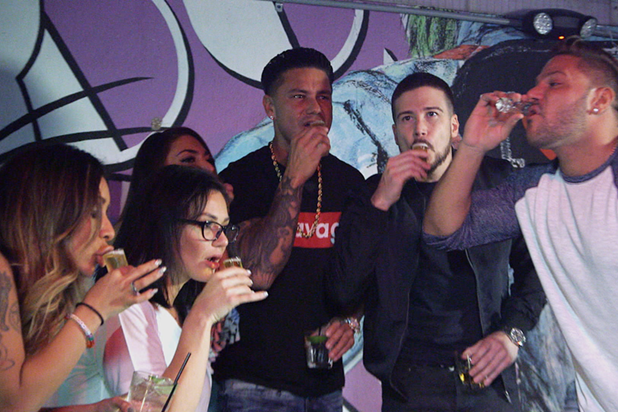 I loved the line “I don’t think anyone fist-pumps anymore,” because it really just seemed like a good reflection of how much you guys have changed — and how much the world has changed — since the show first came on. Did you ever feel like maybe you guys were getting too old for all of this?
Missing the kids was the worst part for me. I would talk to my husband, and he would be like, “Yeah, our daughter has a fever, we’re bringing her to the doctor.” And my son’s in kindergarten and I’m not there helping him with schoolwork. I just feel the mom guilt, where I’m like, “Why am I here? Oh, my daughter’s sick, but let’s go do shots,” you know? Because if I wasn’t doing a show, I’d be on the plane home to my kids. So the mom guilt was definitely real, I had to keep telling myself, “Just enjoy it, have a good time, because you’re stuck here anyway. So just enjoy it instead of crying all the time.”

How long were you away from home?
We filmed for four weeks, but we actually got to go home two weeks in and see the kids for a few days. So that was actually nice to make sure that they didn’t forget about their mom.

Did the cameras follow you guys back?
Yeah, it was really nice. There are a few cute moments.

And MTV’s already renewed the show for a second season. Was there any hesitation on your part to agree before signing on?
I was definitely always down and ready to go. It was just a matter of how am I going to do this with kids. How am I going to stay sane and be able to take care of my family?

What do you think future seasons of this show looks like?
I’ve always said partying gets old at some point. So I feel like Season 2, it would be more about our lives. Getting together and, like, meeting Ron’s baby. Just doing real-life things instead of going out and partying all the time. I don’t really do that.

Is being a TV personality something you see yourself doing forever? Do you want to keep doing the show?
I definitely enjoy my job, and I enjoy reality so much. So I could definitely see myself doing it for the rest of my life. It just has the fit to who I am.

Viacom’s music-centric network has taken many forms since ”I want my MTV!“