Well, “Up in the Air” now has another writer controversy to deal with.

And this one’s even sillier than the last one.

After weathering a little media storm over whether nominated writers Jason Reitman and Sheldon Turner (who didn’t work together) got along, the film is now faced with a disgruntled novelist, Walter Kirn, who’s begun to publicly complain on Twitter that he hasn’t been invited to the Oscar show. 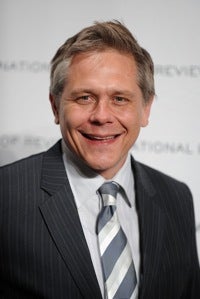 On Wednesday, Kirn, who wrote the 2001 novel on which the film was based, tweeted the following: "caution to writers: don’t expect that because you write a novel that becomes an Oscar-nominated film that you’ll be invited to the Oscars”.

The New York Post’s Page 6 wrote about it, running a couple of Kirn’s tweets (one of which he later deleted) and saying that the novelist had thought about requesting press credentials.

(If he knew anything about the Oscars, he’d know that the deadline for that passed a long time ago, and that he would have been turned down if he’d tried.)

The Carpetbagger picked up on the story and ran with it, adding that “Crazy Heart” novelist Thomas Cob wasn’t invited, either.

The L.A. Times suggested that Kirn could rent a tux and become a seat-filler. (No, he couldn’t; there’s a vetting process for that, too.)

One fan on Twitter called on people to write Jason Reitman to say that Kirn should be invited, as if it was the director’s call.

And New York magazine reached Kirn, who said, "I didn’t realize that Twitter is a megaphone, not a note passed around fourth grade."

All of this fuss essentially ignores or misrepresents the actual process of allotting Oscar tickets in the 3,300-seat Kodak Theater.

The Academy does not invite people to the Oscars just because they have connections to a nominated movie. The Academy allots two tickets to each nominee – that’s about 400 seats accounted for, all on the prime orchestra level of the Kodak – and then makes an additional allotment to each studio.

But studio allotment is not large: the major studios receive about half a dozen seats in the front section, another pair in the partierre, plus a couple additional pairs in the Kodak’s balconies. (Those are the seats where nobody wants to sit.)

Smaller companies will receive even fewer seats. And you can bet that those prime seats go straight to the executives at the very top of the company.

Other tickets go to AMPAS officials, ABC executives and show sponsors. A small number are sold to Academy members who aren’t nominated, but who win an annual lottery for the remaining seats.

And once the allotment is made, the jockeying starts. Nominees can request additional seats, though there’s no guarantee they’ll get them, particularly in prime locations. Studios can beg for more to accommodate people in Kirn’s boat — like, for instance, "Crazy Heart" director Scott Cooper, whose film got three nominations but who’ll have to score extra seats or go as a guest of one of his nominees.

If Walter Kirn has been “snubbed,” he’s hardly alone; Hollywood is full of people right now who don’t know if they have tickets, and many of them have perfectly good reasons to be there. The Academy has enough requests to fill the Kodak several times over, and the seating chart is always in flux into Oscar week.

Kirn will almost certainly end up with his tickets; Paramount has put in its requests, and more than one of the “Up in the Air” nominees, including writer Sheldon Turner, have requested additional tickets specifically for Kirn.

(They’re also trying to get tickets for a couple of the film’s producers, who were left off the nominees list because the Academy only allows three nominees in the category.)

If the novelist wants a fancy, engraved invitation to the Oscar show, he’s going to need to write a screenplay and score himself a nomination.  But if he only cares about going to go to the show, he probably just needs to sit tight for a while, and let the process work.

Because that’s what half the town is doing right now, putting in requests and begging the appropriate people and calling in favors without making a fuss about it.

I mean, do you think the makeup nominee who requested 11 extra tickets is going to tweet about it? Not a chance.

In the last two days, I’ve talked to a Buddhist monk who’s hoping to get a ticket (he’s featured in the documentary “Burma VJ”), and to the director of a short documentary, “The Last Truck,” who’s trying to land seats for the laid-off auto workers featured in his film.

Somebody complain to Jason Reitman, quick!