Against all odds, “So You Think You Can Dance” returns to Fox on Wednesday night for its long-delayed Season 17 after a very long COVID break.

Ahead of the premiere, TheWrap talked to host Cat Deeley about how she thought the show was never coming back and how the enthusiasm of the contestants and the new judge lineup of YouTube star JoJo Siwa, dancer and “SYTYCD” All-Star Stephen “tWitch” Boss, and “Glee” alum Matthew Morrison bring a “fresh energy” to the show.

It’s a change of pace from perennial judge Nigel Lythgoe, who remains on as executive producer, and Mary Murphy, whose “Hot Tamale Train” raves became a trademark of the show until her 2015 exit.

TheWrap: You must be so excited to be back.

Cat Deeley: Oh my god, yeah. We were in the middle of preproduction on Season 17 and then COVID hit and everybody kind of looked at each other and said, “Is there possibly a world in which we can make this show, but keep it all COVID safe?” And there was just no way of doing it. I thought that was it. I thought, “You know what, we’ve had a good run. I’m incredibly proud of everything we’ve done and achieved with the show but, OK, that’s it.”

Then about five months ago I got a phone call. And they said, “If we can make the show, would you be up for doing it again?” And I was like, “No way!” Even a global pandemic can’t kill us! It’s like the little train that could. We’ve never done the massive, missive figures of “American Idol” or anything like that, but we do have a fandom that is so dedicated and loyal. If you love our show, you love it with every cell in your body. The audience is so loyal and so dedicated and everyone is so excited to be back. To be able to come back is amazing.

Let’s talk about the new judges. Obviously you’ve worked with tWitch before. Had you met Matthew Morrison or JoJo before this?

No, I hadn’t. When they came to the audition show, I had no idea what to expect. I’ve met Matthew a couple of times in New York at the Upfront when he was doing “Glee.”  He was always absolutely charming, but really only in passing. I never got the chance to bump into him again.

And JoJo, I’ve seen her grow up while the show has been on. She’s so eloquent and so smart. It’s almost like she’s been here before. She has a maturity to her, but it’s not precocious. It’s just like she’s been here before, that’s the best way I can describe it. She gives great advice that absolutely comes from the right place. She’s like a ray of sunshine, she brings such fresh energy. She gets so excited about the show and about the dancers and their talent.

And then of course tWitch, I’ve always adored him. I think it was Season 2 when he tried out for the first time and then he came back again [and was runner-up in Season 4] and I’ve seen him become this amazing man. He does everything from being the DJ on “Ellen” to hosting “Ellen” himself to “Magic Mike.” He’s just an incredible human being. And he met his wife Allison [Holker] on the show, so we’re all family.

Was it kind of strange not to have Nigel Lythgoe back in the judge’s seat for the first time?

Listen, it’s always very different, but I think it would have been more strange if we’d come back after only one year. I will absolutely miss Nigel. And of course Mary. They’re brilliant inside and out and their careers are amazing. But I do feel that it’s good to mix things up, too. Both Nigel and Mary have been so supportive of the new judges coming in. I think Nigel will appear at some point during the show, I don’t quite know when yet. But I think he will. I think they’re honored that their legacy lives on. They will absolutely be watching the show. 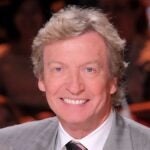 The contestants are excited that their show is back. They grow up watching the show and they’ve always told themselves, “When I turn 18, I’m going to audition for the show.” So they’re really pleased because most of them thought, “Oh, no, now it’s gone forever.” So there’s just this new energy.

I think because dancers haven’t been able to go to class, they’ve improvised. They’ve been learning new routines in their bedrooms and over the internet, so it’s quite unique. It’s forced them to think outside the box. Lots of dancers are doing all different types of styles. It’s not just dancers who have been training all their lives, but street guys and Broadway people who don’t necessarily fit the mold.

You don’t just have a cast of people who look the same and are all cookie cutter. It’s a really interesting lineup. I’m intrigued and fascinated by these amazing human beings and I can’t wait for them to be in our [top finalists]. I think it’s going to be amazing.