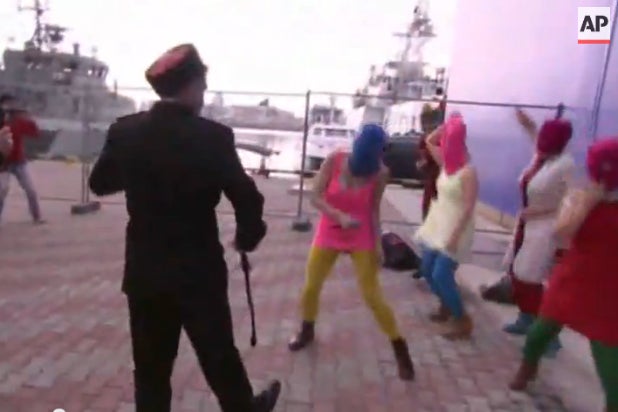 Members of the all-female Russian protest punk band Pussy Riot can be seen beaten, pepper-sprayed, and horse-whipped by Russian police during a demonstration outside an Olympics venue in a graphic new video released by the Associated Press Wednesday.

In the video, Russian authorities apparently use pepper spray and horse whips against the women just seconds after the band members don their trademark neon ski masks and begin singing in Sochi. One shot shows the performance and police action taking place immediately outside one of the venues for the Winter Olympics, taking place in Sochi through Feb. 23.

The brutal crackdown against the Pussy Riot demonstration comes one day after estranged Pussy Riot members Nadya Tolokonnikova and Maria “Masha” Alekhina — who were also part of Wednesday’s protest — say they were arrested without cause in Sochi and mistreated by Russian police.

Tolokonnikova and Alekhina were two of the Pussy Riot members arrested in 2012 and charged with hooliganism following a performance at a Moscow cathedral protesting Russian President Vladimir Putin.

Their arrest and imprisonment was widely criticized as an act of censorship from an increasingly authoritarian government, and anti-Putin “Free Pussy Riot” protests sprung up around the world.

The Pussy Riot members received an early release from jail in December as part of a sweeping amnesty law for nonviolent offenders, but the band members blasted the move as an attempt by the Russian government to improve its image ahead of the 2014 Winter Olympics in Sochi.

“This is a lie,” Alekhina said at the time. “I would have sat here until the end of my sentence, because I don’t need mercy from Putin.”