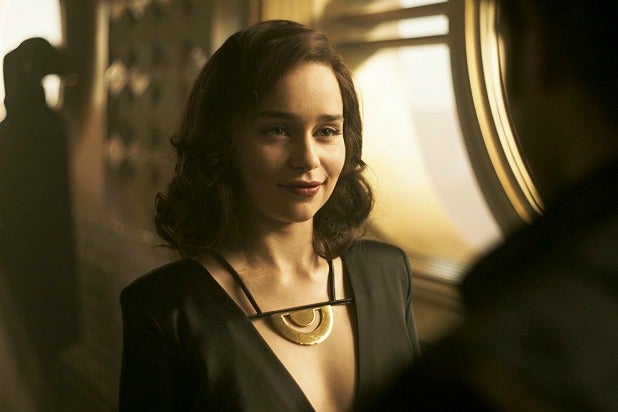 (Note: This post contains massive spoilers for the end of “Solo: A Star Wars Story.” Just putting that out there.)

“Solo: A Star Wars Story” fills in the backstory of Han Solo and quite a few other characters. The movie’s biggest twist, however, doesn’t have to do with the events that lead Han to becoming one of the greatest smugglers in the galaxy — it’s about one “Star Wars” character who turns out to be still alive, still influencing the galaxy, and still posing a threat to a lot of people.

That character is Darth Maul (Ray Park, voiced by Sam Witwer), and if you haven’t been keeping up with any of the ancillary “Star Wars” material surrounding the core film franchise — specifically the animated TV shows that he’s prominently appeared in — seeing him again was probably a bit of a shock. Especially since he shows up as the boss of crime syndicate Crimson Dawn — and also the new boss of Emilia Clarke’s Qi’ra as she fully embraces a life of crime at the end of the movie.

Is there going to be more Darth Maul in upcoming movies? Probably not, but it could be possible they’re setting up a crossover with one of these upcoming TV shows, like the Cassian Andor-focused “Rogue One” prequel series that was just announced for the Disney+ streaming service.

The last we saw of Maul on film was way back in “The Phantom Menace” in 1999, when the apprentice of Darth Sidious, aka Palpatine (Ian McDiarmid), got cut in half while fighting with Qui-Gon Jinn (Liam Neeson) and Obi-Wan Kenobi (Ewan McGregor).

Also Read: 'Solo: A Star Wars Story' - Did You Catch Han's 'Back to the Future' Reference?

Fighting two Jedi at once, the Sith Lord killed Qui-Gon, which enraged Obi-Wan. With a cool jump and a fast Force move, Obi-Wan managed to slice Darth Maul in half at the waist. Maul fell down a long shaft, disappearing into darkness, and wasn’t seen again in the prequel trilogy of “Star Wars” movies. If all the “Star Wars” you knew about was the movies, you likely would have presumed him to be very dead.

In fact, though, Maul is a major figure in “Star Wars” side stories that have been taking place almost since his first appearance in “The Phantom Menace.” The details of his survival first come up in the animated show “Star Wars: The Clone Wars,” where he appears sporting robotic legs and a desire for revenge against Obi-Wan Kenobi. In the show, we see that, through sheer hatred, willpower, and a mastery of the Force, Maul (voiced by Witwer) manages to keep himself alive after the fight with Kenobi on Naboo — and to grab hold of an air vent as he tumbles down the shaft he fell into.

From there, Maul hauls himself into a garbage container, basically clinging to life through Force power and anger, which isn’t unlike what happened to Anakin Skywalker (Hayden Christensen) after his fight with Kenobi in “Revenge of the Sith.” The container takes him to the junkyard planet of Lotho Minor, where Maul manages to get some new spidery robot legs built for him. His rage makes him insane, but he keeps himself alive thinking only about getting revenge on Kenobi.

Popping up again at the end of “Solo” as a spooky crime boss suggests the “Star Wars” universe could introduce a whole new chapter of Maul’s life, taking place between the end of the Clone Wars, during the 19 years before Luke Skywalker (Mark Hamill) blew up the Death Star in “A New Hope.” We already know a ton about what happened to Maul after “The Phantom Menace,” though. His eventual death was covered in the other animated show, “Star Wars: Rebels,” which takes place just a few years before “A New Hope.” That puts “Solo” somewhere in the timeline after “Revenge of the Sith” but before “Rebels.”

The question, then, is what in the world is his appearance in “Solo” setting up? The first and most obvious option is that he and Qi’ra will have big parts to play in whatever the next “Star Wars” animated series that “Clone Wars” and “Rebels” showrunner Dave Filoni has coming up next. “Rebels” just ended recently, so it’s likely that something new will be on the way soon, and considering how prominently he’s been to those previous shows, it would not be surprising at all to see him show up again in that realm should whatever he’s got cooking take place when Maul is still alive.

The second possibility is that the pair will play into the other prequel movies that are allegedly in the pipeline — the Obi-Wan and Boba Fett films that are also set prior to the original trilogy. There’s no guarantee that either of those movies will ever even be produced, considering they’ve both been rumored for years with no official word ever being uttered about them. So who knows?

In any case, should you want to know more about what Darth Maul got up to in those TV shows you didn’t watch, we have the rest of the rundown below.

Maul’s story is continued through “Clone Wars,” comics, and later in “Rebels.” During the Clone Wars era, he’s rescued from Lotho Minor by his brother, Savage Opress, gets his mind right, and acquires a new pair of cybernetic legs. Maul becomes the leader of a criminal group called the Shadow Collective that is equally opposed to the Republic and Jedi, and the Separatists and their leader, Darth Sidious. Kenobi and Maul fight a couple more times, but Maul is never able to take him down. He does, however, manage to conquer the planet Mandalor with his criminal army, and uses it as a base of operations.

Maul and Opress raise their army of criminals by uniting a series of gang bosses, but eventually Maul goes up against Sidious and loses. Opress dies in that fight, and while Maul escapes, his Shadow Collective army is eventually defeated. He never gets his revenge on Darth Sidious or Count Dooku, but escapes their clutches and vanishes. Maul later lost control of Mandalor when Anakin’s former Jedi padawan, Ahsoka, led the Grand Army of the Republic to the planet and defeated him. The events of “Revenge of the Sith” take place after that, at some point, and Maul seemingly goes into hiding.

Also Read: Does This 'Solo' Deleted Scene Give Us a New Glimpse at Lord and Miller's Version?

Maul later shows up in “Rebels,” which is set 15 years after the events of “The Clone Wars” show, when Jedi padawan and protagonist Ezra Bridger encounters him on the planet Malachor. Maul apparently crashed a ship there when he traveled to the planet in search of a Sith weapon, and has been been stuck there ever since — “years,” Maul tells Ezra, although it’s not clear if he’s lying. He manipulates Ezra into helping him, before betraying him, and then manages to escape Malachor.

Ezra and Maul remain linked through the Force, and Maul continued to attempt to turn him to the Dark Side, while also gaining a key piece of intel: The location of Obi-Wan Kenobi. Maul almost successfully turns Ezra, who eventually resists him to save his friends. Maul takes off for a final showdown against Obi-Wan on Tatooine, where the Jedi Master is hanging around, guarding Luke Skywalker.

Still driven by his desire for revenge against Kenobi, Maul heads to Tatooine and fights him one last time in “Rebels” — and Kenobi finally takes him down for good.

Maul’s appearance in “Solo” suggests there’s still more to his story, though. Crimson Dawn is described as being an extremely powerful criminal syndicate that works both within the Empire and against it. That means he’s clearly a force in the galaxy. Given what we know about Maul’s anger at Darth Sidious and the Empire, it seems very likely he would try to use Crimson Dawn to take down the Empire and the Emperor. If he becomes a problem for the Empire, that would track with the events of “Rebels.” When Ezra encounters Maul on Malachor, he’s being hunted by the Emperor’s powerful Inquisitors, so maybe what we’ll see post-“Solo” is the series of events that caused the Emperor to turn his attention back to his former apprentice.

Whether there are sequels planned after “Solo,” or the story is suggesting another “Star Wars” show, we obviously haven’t seen the last of Darth Maul. It seems entirely possible he’ll show up again somewhere — perhaps in one of these live-action TV shows that Lucasfilm is putting together for the Disney+ streaming service? Could we see Darth Maul and Qi’ra facing off against Cassian Andor someday? Who knows?