Isolation is not usually the most inspiring topic for writers, with the difficulties the situation poses for creating conflict and a compelling story. But “Hunter” creator David Weil found the idea of being alone sparked his imagination in enough ways that he was able to develop a seven-part anthology series based entirely on solo plots, aptly titled, “Solos.”

The Amazon Prime Video show stars Nicole Beharie, Morgan Freeman, Anne Hathaway, Anthony Mackie, Uzo Aduba, Helen Mirren, Dan Stevens and Constance Wu in “character-driven stories” that “contend that even during our most seemingly isolated moments, in the most disparate of circumstances, we are all connected through the human experience.”

“Solos” creator, writer and director Weil said during TheWrap’s Emmy Screenings Series panel, which also featured “Solos” director Sam Taylor-Johnson, that the concept was originally formed for him many years ago, when Weil became infatuated with one storyteller telling one story. 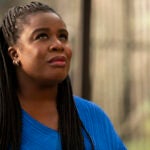 “The piece really came about with my desire to want to try and return to how I first fell in love with storytelling,” Weil said. “And I first fell in love with storytelling with the finest storyteller that I knew, my grandmother, who would tell me stories about her experiences during the war around her kitchen table. She would transport me to these incredibly difficult worlds, but worlds that also had hope and beauty. Worlds of her dreams and her fears. And so there was such a power and potency, I think, in one storyteller in one environment telling a singular story and them really being able to transport you to so many different places. And so I wanted to create that experience for an audience.”

“Solos,” which was shot last year under COVID-19 safety guidelines, consists of seven episodes, each named for their central character: “Leah,” “Tom,” “Peg,” “Sasha,” “Jenny,” “Nera” and “Stewart.” Taylor-Johnson worked alongside Weil for two of the episodes, “Peg,” which stars Helen Mirren, and “Stewart,” an installment that features Morgan Freeman and Dan Stevens. (Just in case you haven’t seen it yet, we won’t reveal the spoilery reason behind this one deviation from the one-actor format here.)

“David sent me ‘Peg,’ that was the first one I read. And as soon as I read it, I knew in my gut that it was something I had to do — wanted to do — and felt I could see how to do,” Taylor-Johnson said. “And it was certainly a challenge to think about how to create an entire episode of one person, a singular journey. But the way that David had written and then structured it, it takes you on such a journey. And the emotional content is so strong. And in the hands of Helen Mirren, it was just so beautiful. And having somebody with such a strong theater background, that she could hold that, that she knew how to pace such a strong monologue, if you like. And so I was excited when David offered ‘Peg.’ And then I was like, ‘What else? Do you have any more?’ And, luckily, he did. And I got to make ‘Stewart,’ too, with Morgan Freeman, which was a treat.” 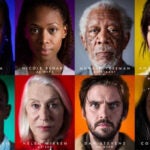 The logistics of shooting “Solos” made production much easier to do than many other projects that faced shutdowns and delays, because, as you can probably guess, shooting only one actor automatically makes things safer for everyone.

“I wrote the first episode, ‘Tom,’ and then ‘Peg’ a year ago in May, during the pandemic,” Weil said. “And the pandemic certainly accelerated the possibility for such a unique and daring series to be. Not only was it speaking to, I think, many of the emotions and the feelings that people the world over were having, feelings of isolation and loneliness and solitude, but to film this, to actually produce it, it was incredibly safe during the pandemic. It was one actor in one environment, for the most part. And so there just became this moment in time where ‘Solos’ really had a path to being.”

Watch TheWrap’s full Emmy Contenders panel with the “Solos” team via the video above.