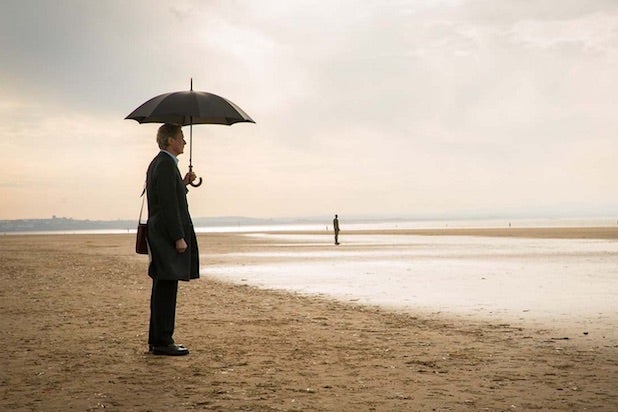 Hardscrabble grief hides behind high-scoring words on the Scrabble board in “Sometimes Always Never,” English director Carl Hunter’s scattered-brained but ultimately affecting hodgepodge of a first feature. As if they’re random letter tiles from a full bag, some ideas create meaning while others crowd the hand without much use.

Bill Nighy dons the deadpan charm of wordsmith Alan, a man unable to engage with the likelihood that his son Michael, gone missing long ago, may never turn up. “Hope is a great friend,” he tells his other adult child, Peter (Sam Riley), during a trip toward possible closure. Nuanced emotions escape his vocabulary, and in his quest for the prodigal son, he’s alienated the son who remains, the solid constant he takes for granted.

In “Sometimes Always Never” — which is not to be confused with Eliza Hittman’s recent “Never Rarely Sometimes Always” — two-letter terms, mainly from the Greek alphabet, have secured many a Scrabble victory for Alan. It’s a brainy pastime he dominates with aggressive competitiveness. For Peter, however, it’s symbolic of the rupture between them, and of a lifetime of second-bests and a childhood of cheap generic toys and feeling like “a poor substitute.”

Alan, a defiantly unemotional, tech-savvy boomer, mostly ignores those claims, but briefly admits his own status as an insufficient replacement for the boys’ mother. Still, above all, the search for the absent loved one consumes him. He never comes out and flatly says, “The wrong son died,” but Peter can read it in the subtext of his actions. An encounter with a couple in a similar predicament momentarily spurs Alan’s empathy, to the extent that he has any.

Localized comedy, like a nod to Pickwick’s “Top of the Pops” cover songs, will fly over most people’s heads but will help some viewers find the humor in some of the more disheartening scenarios, such as a visit to the morgue. Nighy’s earnestly debonair presence, ideal for the role of a walking thesaurus not prone to introspection, saves Alan from seeming intentionally hurtful. To cope, he’s submerged himself in practicality, actively trying to solve a mystery that may have no answer. That apparent obliviousness to the facts frustrates Peter intensely – but is the correct approach to fight until dad admits his faults, or to accept that he’s handling the pain as best he can, even when that means a certain disconnect?

Strong casting keeps the film thriving through its many winding subplots. Scenes between Nighy and Riley dominate, but the always-delightful Alice Lowe, as Peter’s wife, throws down a power tile with a warm query about the best outcome in the Michael situation: If he is dead, then it’s a tragedy; but is he is alive living somewhere and shunning the family, then guilt may be unbearable for Alan. It’s a gamble with no winning result.

A third of the way in, the focus shifts to Alan’s initially vapid relationship with teenage grandson Jack (Louis Healy), an introvert trying to find the confidence to approach a girl. The boy’s makeover from sweatshirt gamer to sharp-dresser unceremoniously unmasks the movie’s title as a reference to the proper use of buttons on a suit jacket, depending on the occasion.

Alan’s tailoring expertise bears no relevance past this point; it’s another in the pile of buried details, like his short-lived affair while staying at Peter’s home. More noteworthy is his obsession with sticking labels on household objects to describe their purpose or to express affection he can’t verbalize.

Cottrell Boyce furthers the character’s need for functionality through such eccentricities, and then Hunter, via television DP Richard Stoddard, juxtaposes them with hyper-stylized production design and lighting that ads moody elegance to commonplace environments. Saturated hues, animation, title cards with acute definitions and short black-and-white flashbacks make the aesthetic language rather verbose.

This across-the-board kitchen-sink format can only be rationalized as the forces that have kept Peter looking for his father’s eyes, for a lick of acknowledgement, for years. It’s only in a climactic sequence in an isolated forest, amusingly ripped from Bergman’s “The Seventh Seal,” that then two are on the same wavelength. At that point, the son who never left defends the beauty of being ordinary, neither stoic nor over-the-top, just perfectly unremarkable.

“Sometimes Always Never” advocates for the pursuit of small pleasures, for the appreciation of what one has rather than longing for what one lacks, for the brilliance in the mundane, like a board game played for the mere enjoyment of using words that mean something. To get that across, unfortunately, it excessively crowds our field of vision with low-impact, discarded tiles. Yet underneath those long-winded moves, there’s a powerful statement worth plenty in humanity points.