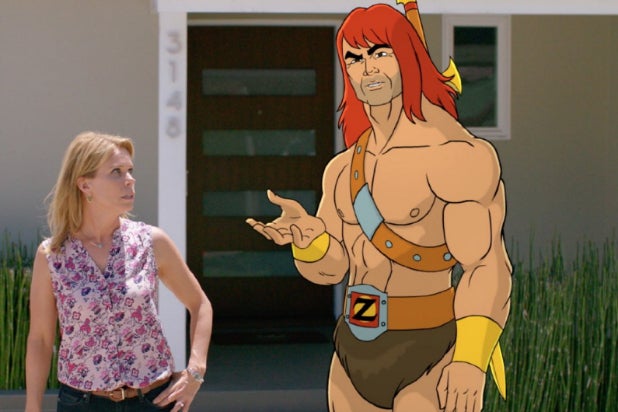 The live human beings on “Son of Zorn” aren’t staring at a tennis ball on a stick during takes. They’re actually pretty much looking at “nothing” at all, star Cheryl Hines revealed to TheWrap.

“We’re going so quickly, and Zorn moves around in a scene,” Hines said. “For whatever reason it just works better if we can remember where we were looking.”

Lippert is the stand-in for the fictitious Zorn, but only for rehearsals. The 6’7” funny fella helps Hines & Co. set their eye line way high for their scenes with the sword-wielding cartoon. Sometimes they’ll throw tape on a wall too — but even that’s imperfect.

And even a man of Lippert’s stature has his limits. He can’t quite stand in for a giant death hawk, for example, something the TV family also had to play pretend with during a key scene in the series’ pilot.

“We were looking at a tree in the background,” Hines revealed about that one.

“At that point, I don’t think there were even sketches of the death hawk,” she added. “We’re all looking at a focal point and then [writers] are calling out what we’re seeing.”

It only got slightly less weird when they actually saw the mockups, we’re sure.

Acting opposite people and things that aren’t really there hasn’t been the only challenge for “Son of Zorn.” Explaining what the show even is was no walk in the park, especially for the “Curb Your Enthusiasm” star, who was the last actor cast.

“There were a few agents on the line, pitching the idea of the show to me to see if I was interested,” Hines recalled the initial phone call for us. “And then a few other agents got on the phone to try to explain it. I was having a hard time visualizing it.”

Her WME gang eventually just settled on “It’s hard to explain,” and sent her the terrific Lord/Miller script. The rest will soon be TV history.

“Son of Zorn” premieres with a special preview tonight at 8 p.m. on Fox, immediately following an afternoon NFL game. Episode 2 settles into the series’ normal time slot two weeks and a half-hour later.