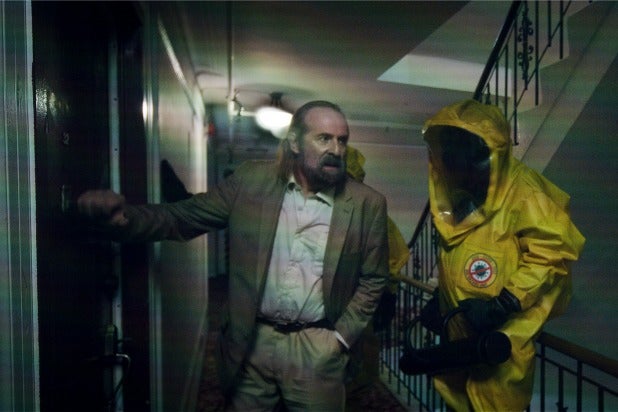 No doubt far more fascinating than “Songbird” is the behind-the-scenes story of how this film was even made in the first place, shot entirely during the COVID-19 pandemic with most cast members interacting with as few other performers as possible.

Part of that story, one would hope, would include director and co-writer Adam Mason explaining what aspect of this dull, tacky thriller justified exploiting a pandemic that is still, as of the week of the film’s release, killing thousands of people every day.

It’s not inherently misguided to use a current tragedy as the jumping-off point of a genre movie, but any filmmaker who decides to do so had better create something provocative or interesting or at least competent to justify it. “Songbird” doesn’t even offer the prospect of staggeringly bad taste or questionable politics; it’s less “Too soon!” and more “So what?” We’re left with just a standard-issue post-apocalyptic dystopian thriller, albeit one with a massively overqualified cast of actors.

Before the plot kicks in, “Songbird” feels more like “Pandemic Actually,” with random snapshots of 2023 Los Angeles, suffering through its fourth year of lockdown and the emergence of the even deadlier COVID-23 virus. Since he’s immune, and has a little yellow bracelet to prove it, Nico (KJ Apa, “Riverdale”) has the run of the city, which is why he works as a courier for Lester (Craig Robinson), whose delivery company is very in-demand among a homebound populace.

Lester keeps tabs on Nico and his other couriers thanks to Afghanistan War vet Dozer (Paul Walter Hauser, “Richard Jewell”), who’s very skilled with a drone; Dozer strikes up a virtual friendship with singer-songwriter May (Alexandra Daddario), who came to L.A. to pursue a music career and then got stuck in town when the pandemic hit; sneaking out to see May at nights is wealthy creep William (Bradley Whitford); William and his wife Piper (Demi Moore) are selling counterfeit yellow bracelets for top dollar.

Nico finds himself in need of one of those bracelets when his girlfriend Sara (Disney vet Sofia Carson) — they met during lockdown, so they’ve never been in the same room — is threatened with one of the city’s infamous Q (for “quarantine”) zones after her grandmother, with whom she shares an apartment, dies of the virus. The Q-zones are shown from above looking like walled refugee camps, and the characters discuss them with dread, but “Songbird” can’t be bothered to explain what happens in them or whether or not the people inside should even be isolated.

The interpersonal relationships — between Nico and Sara, Dozer and May, even the mutual loathing of William and Piper — are the most interesting aspects of “Songbird.” But this is a Michael Bay production, so of course human beings and their emotions can’t be shoved offscreen fast enough when Nico could be on his motorcycle, zipping around the walled fortresses L.A.’s most exclusive neighborhoods have become, or hazmat-suit-clad representatives of the Sanitation Department (led by Peter Stormare as an evil bureaucrat) could be busting down doors, or panicky Angelenos could be stabbing each other.

“Songbird” opens with its most memorable visual, a Los Angeles freeway overgrown with grass and weeds as the exits are blocked off with concrete dividers. And the film does, perhaps presciently, imagine that every 2023 residence will have a dropbox that lights up to sanitize incoming and outgoing deliveries. Otherwise, this is the same grim future we always get in movies like this, with isolated, graffiti-covered downtown streets and glass modernist pleasure-prisons for the rich and powerful.

Contemporary troubles and anticipated ones from the near future can absolutely be the stuff of drama — the BBC and HBO’s “Years and Years” made watching the next decade-and-a-half’s worth of calamity into gripping television — but “Songbird” assumes that saying “COVID” a few times will somehow imbue the production with urgency and relevance. There’s not much tension, let alone terror, to any of this, despite attempts to market the film as a “terrifying thriller.” It’s a pretty good ad for those lightboxes, though.

“Songbird” will be released via premium-video-on-demand on December 11.