It might have gotten a little more attention under its original title, “We Want Sex,” but Sony Pictures Classics is taking the classier road with its acquisition of “Made in Dagenham,” director Nigel Cole’s film based on the true story of a 1968 strike by female workers looking for equal pay at the Ford Dagenham car plant.
In other words, it’s “Erin Brockvich” (crusading women in a sexist workplace) meets recent SPC release “An Education” (England in the 1960s). 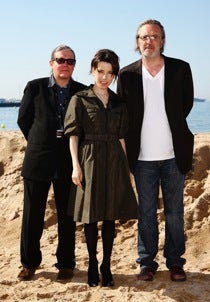 Sony Classics preemptively purchased US and multiple foreign rights to the film, which stars Sally Hawkins, Rosamund Pike, Miranda Richardson and Bob Hoskins. A Sony press release puts the film in a commercial context by calling it “one of those unknown true stories of triumph audiences love to embrace.”
Cole’s previous films include “Calendar Girls” and “Saving Grace.” Produced by Stephen Wooley (“The Crying Game,” “Interview with the Vampire”) and Elizabeth Karlsen (“Ladies in Lavender”), the film was developed with funding from the UK Film Council, and backed by BBC Films, BMS Finance and Lip Sync Productions.
SPC has frequently worked with Wolley and Karlsen and with BBC Films over the years.
Photo: Stephen Wooley, Sally Hawkins and NIgel Cole at the 2009 Cannes Film Festival, where the film was promoted under its original title of "We Want Sex." (Photo by Gareth Cattermole/Getty Images)