The formal dedication will take place on July 12 with a reception, the unveiling of a sign, and a screening of Harryhausen’s 1963 adventure classic “Jason and the Argonauts,” which will make its debut on Blu-Ray from Sony Pictures Home Entertainment on July 6.

In the Sony press release announcing the renaming, Harryhausen said the honor “means as much to me as my Academy Award and the BAFTA honor I just received, especially knowing that it is a working theater where visual effects artists and animators work every day.” 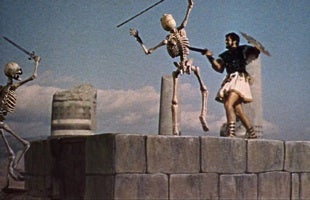 Many of Harryhausen’s most celebrated films, including “The 7th Voyage of Sinbad,” “Jason and the Argonauts” (right) and “20 Million Miles to Earth,” were made for Columbia Pictures, which later became Sony.  He is perhaps best known for the stop-motion techniques he used to bring an array of monsters and creatures to life.

The theater has undergone technical upgrades in preparation for its renaming, from the addition of a digital 3D stereoscopic system to a projection system tied directly to Sony’s animation and visual effects computer production infrastructure.

Oscar-winning effects artist Ken Ralston, the creative head of Sony Pictures Imageworks, called Harryhausen “an inspiration” to “not just effects people, but filmmakers in general …. And we’re glad he has a home with us."

Last Saturday, Harryhausen was presented with the Special Award from the British Academy of Film and Television Arts, at a ceremony that included appearances by directors Peter Jackson and John Landis, and video messages from James Cameron, Steven Spielberg, George Lucas, Tim Burton and Guillermo del Toro.  The National Media Museum in Bradford, England, has also launched a fundraising campaign to acquire and house his collection of sketches, storyboards and models.

The “Jason and the Argonauts” Blu-Ray was restored under the supervision of Sony’s senior VP Grover Crisp.  It includes commentaries by Harryhausen and Peter Jackson, among other new features.