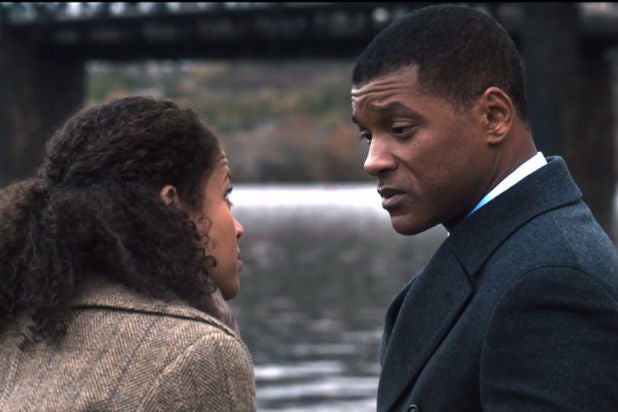 As Sony Pictures kicks off its publicity campaign for the Will Smith football drama “Concussion,” the National Football League is preparing its offense.

“We are encouraged by the ongoing focus on the critical issue of player health and safety. We have no higher priority,” Jeff Miller, NFL Senior Vice President of Health and Safety Policy, said in a statement to TheWrap.

The league is bracing for more mainstream attention on chronic traumatic encephalopathy (CTE), a sports-related injury caused by repeated head trauma that has afflicted scores of former pro football players.

The biggest spotlight on the issue may come from “Concussion,” which is based on the true story of Dr. Bennet Omalu (played by Smith) who discovered CTE while performing an autopsy on Pittsburgh Steelers center Mike Webster.

The film’s new trailer suggests the league tried to strong-arm Omalu into burying the evidence of the affliction and the health risks for football players. “You’re going to war with a corporation that owns a day of the week,” a fellow doctor (Albert Brooks) advises Smith’s Omalu, referring to the sacrosanct American tradition of “Sunday Night Football.”

Off screen, the NFL doesn’t appear to be flexing its considerable muscle to suppress the content of the film, which is due to hit theaters on Christmas Day. Instead, it seems to be working hard to promote it’s programs in support of players with head injuries.

The NFL Foundation is sponsoring a two-day conference on concussions starting October 15, united more than 30 physicians to discuss best practices and new therapies for the condition.

“We all know more about this issue than we did 10 or 20 years ago. As we continue to learn more, we apply those learnings to make our game and players safer,” Miller said.

Miller is also amenable to a joint effort with Sony Pictures in raising awareness around concussions, an individual familiar with his thinking told TheWrap, though they’ve made no outreach to that effect.

Meanwhile, Sony is busy trying to address speculation that director Peter Landesman and studio executives toned down the script for “Concussion” for fear of offending the league, allegations first raised in a Tuesday article in The New York Times based on emails and screenplay drafts exposed after the notorious computer hack last year.

A Sony spokesperson responded, “Today’s NYT article and headline, written by individuals who have not seen the film, contains many misleading inferences.  As will become immediately clear to anyone actually seeing the movie, nothing with regard to this important story has been ‘softened’ to placate anyone.