Sony Pictures Television has acquired Industrial Media in a $350 million deal as part of a push toward more nonfiction content.

“At SPT our focus is on leadership and quality in growing areas of television, and nonfiction content makes up a significant share of TV viewing,” Ravi Ahuja, Chairman of Global Television Studios and SPE Corporate Development, said in a statement. “Acquiring Industrial Media gives us scale and expertise that nicely complements our current TV production businesses. Eli, Aaron and their talented group of producers have consistently succeeded with high-quality series and documentaries. We can’t wait to get to work with them.”

Industrial Media has produced titles including “American Idol” for ABC, “So You Think You Can Dance” for Fox, the “90 Day Fiancé” franchise for TLC, “Indian Matchmaking” for Netflix, “We’re Here” for HBO, “The Curse of Von Dutch” and “The D’Amelio Show” for Hulu and “Secrets of Playboy” for A&E. 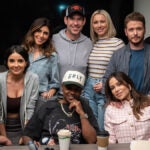 Industrial Media CEO and founder & CEO of IPC, Eli Holzman, will join SPT as President of Nonfiction Entertainment upon closing, reporting to Ahuja.

In a joint statement, Holzman and Saidman said: “This is the most exciting time in the nonfiction business with more opportunity and more content being made than at any other period in the history of the genre. At Industrial, we have assembled some of our industry’s most sought-after storytellers. And now we have partnered with a leading independent supplier to the global film and television marketplace. Our ambition in working with Tony, Ravi and the Sony Pictures Television team is to supercharge our growth, amplify our ability to attract the very best talent both in front of and behind the camera, and to continue pushing the boundaries of the medium.”

SPT also announced the formation of a new Game Show production division to be led by longtime SPT executive, Suzanne Prete. In her most recent role as  EVP, Business & Strategy, Prete oversaw the business operations of “Jeopardy!” and “Wheel of Fortune.”