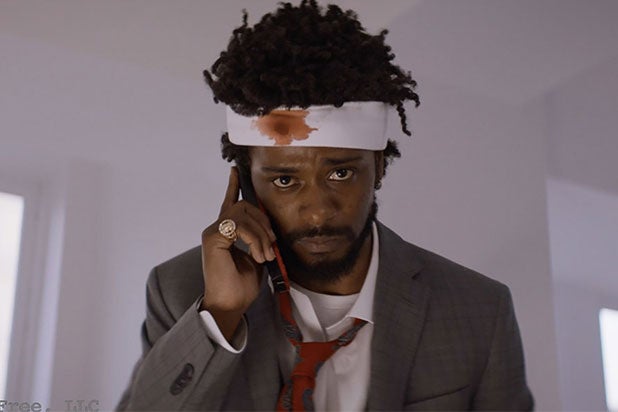 WARNING: This article discusses the ending and major spoilers for “Sorry to Bother You.” Don’t read unless you’ve seen the movie.

There aren’t a lot of similarities between “Avengers: Infinity War” and “Sorry to Bother You,” but just like Thanos demanded your silence while the Marvel blockbuster came out, director Boots Riley has repeatedly asked the press not to give away the big twist in his film.

“For the most part, people have been pretty cool about it, though I’ve seen some reviews give it away,” the “Sorry to Bother You” director told TheWrap in an interview last week. “There are a lot of movies where people say you enjoy it more if you know as little as possible, but I really want that for the audience.”

“Sorry to Bother You” follows a destitute black man named Cassius Green (Lakeith Stanfield) who finds fortune and success as a telemarketer after he uses his “white voice” to close sales. But as he heads up to the company’s penthouse suite to legalized slavery and sell weapons instead of encyclopedias, Cassius soon finds himself at odds with his girlfriend and his former co-workers, who form a strike to demand a union and better wages.

“I knew I didn’t want Cassius’ mind to be changed by the people around him. He needed to see himself and what he had become on his own,” Riley said, “But then I realized…wait, this is a world where basically everyone accepts chattel slavery, and Cassius sells it. He’s gotten to that point where I began to wonder, ‘Would that be enough?’ So I had to come up with something even bigger that would shock him to his mortal core.”

That led Riley to add the macabre twist that everyone who’s seen the film has been talking about. (We will get into major spoilers after the jump, so don’t scroll down if you haven’t seen it yet.)

Also Read: 'Sorry to Bother You': Boots Riley Talks About the 'White Voice' and Avoiding Cliche

After a night of regretful partying at the house of his corrupt, eccentric boss Steve Lift (Armie Hammer), Cassius heads to Lift’s office to receive a promotion offer. But before Lift can make his pitch, Cassius runs off to the bathroom, only to take a wrong turn and discover to his horror… that Lift has been transforming humans into half-horse mutants called equisapiens, with enlarged genitalia and faces that look like Halloween horse masks by way of David Cronenberg’s “The Fly.”

Riley says he wants audiences to see the events of the film through Cassius’ eyes, even if they begin to disagree with his decision to sell out and become a “power caller.” Like a frog in a slowly-boiling pot of water, he wants to get the audience to slowly acclimate to the surreal, satirical nature of his film’s world, where “I Got the S**t Kicked Out of Me” is the most popular show on TV and corporations openly sell the wage slavery that can be seen at factories in China.

But when Cassius opens that bathroom stall door and comes face-to-face with Lift’s real plans, he — along with the audience — is jolted by something so visceral he can’t pretend it’s normal.

“When I’m bending reality, I’m able to convey these larger messages in a way that remains true to myself,” says Riley. “I wanted to do it even in the little details, like the earrings Detroit [Tessa Thompson] wears or one shot where Danny Glover drinks from a bottle inside another bottle. Up to this point the story’s been this windy hallway we’ve gone through. Had it been like a regular movie up to that twist, it would have just come off as lazy writing.”

On its face, a climax concerning horseman mutants being essential to a film’s treatise on late-stage capitalism seems absurd, but that’s part of Riley’s aim of attacking the indignities against human beings that we permit as part of our economy. The director also credits Stanfield for grounding the film even as it slowly escalates the insanity, giving viewers a connection.

“He has such a naturalistic performance and an innate ability to be in the moment with Cassius,” he said of Stanfield. “He makes choices other actors don’t make because he’s not thinking about what he looks like, he thinks about what he feels like in that moment.”

But beyond criticizing the state of America — a state that predates President Trump, as Riley finished the core draft of the script back in 2012 — Riley wants to galvanize his viewers, eschewing an ending akin to “Black Mirror,” where the tragic hero realizes the horrible situation he has fallen into when it’s far too late to turn back.

Instead, Riley brings an ending that is optimistic but not naive, and he says he wants to show viewers that to bring lasting change will require more than just Saturday protests. It will require direct action, forming unions, and using labor as leverage.

“I wanted to show that Cassius does pay a price for what he does in the film,” he says. “But I also wanted to show people that they have a point of power, and that we have to attach social movements to something with economic leverage. And I’m not talking about boycotts. I’m talking about taking it to where people work and where profit is being made.”

“And we need to have more radical leadership in these movements to make sure we get results, because they’re not going to be effective if they’re not going to break the law,” he continued. “The things you have to do to be effective, like forming a union at a fast food joint or a telemarking company, aren’t going to work unless you do things like solidarity strikes. Solidarity strikes are illegal. They’ve been illegal since the 40s, and they were made illegal because they work.”

The Party Report rides shotgun with Priyanka Chopra, Jake Gyllenhaal, and more as a fleet of 100 Acura MDX luxury SUVs shuttles VIPs to screenings and parties

After arriving in Park City to promote his film "Burden," the singer Usher said "Yeah!" to hitting up the scene.