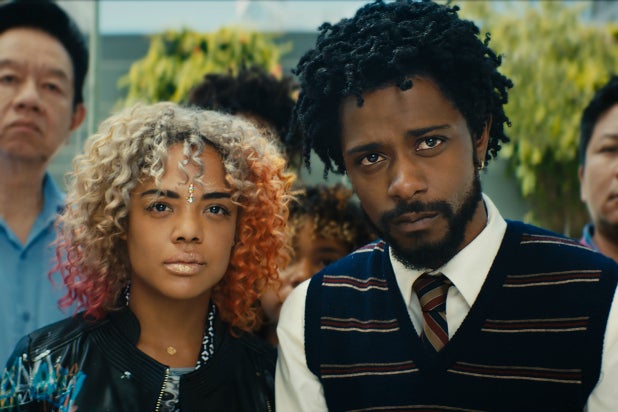 What a movie has to say can be so important that we forgive its excesses in the telling. Whether it was Jean-Luc Godard in the 1960s (or his admirer Gregg Araki in the 1990s), their sprawling, messy movies brought up issues and ideas that other movies didn’t, so even if their films weren’t slick or tidy, they throbbed with a shaggy vitality.

That’s the kind of energy that first-time feature director Boots Riley brings to “Sorry to Bother You,” an outrageous satire that swings for the fences — in about 26 different directions — and even if every hit doesn’t clear, audiences will know they’ve seen something provocative, funny, impolite, meaningful and aimed squarely at the 2018 zeitgeist.

With “The First Purge” in theaters, and “Blindspotting” and “BlackkKlansman” on the near horizon, “Sorry to Bother You” becomes part of an exciting new wave of black cinema, one that’s not afraid of using humor and genre tropes to say real, damning things about the state of the United States and its profoundly toxic history of dealing with its citizens of color. (And by “history,” I mean up to and including this very second.)

While it’s not as overstuffed as “Blindspotting,” this is definitely a new director cramming a lot of ideas into one movie. Where “Blindspotting” overdoes its rhetorical flourishes, “Sorry” leans toward science fiction in a way that exceeds Riley’s grasp, but those surreal touches — Riley’s Oakland is both as familiar and otherworldly as Alex Cox’s L.A. in “Repo Man” — underscore the points he’s making.

Lakeith Stanfield stars as Cassius Green, an underemployed man who gets a gig as a telemarketer. (When Peter Weller made sales calls in “The New Age,” he appeared in the same room as the people he was phoning; Riley one-ups that idea by having Cassius literally crash through the ceiling, still at his desk, into people’s kitchens.) It’s not going well for him, until co-worker Langston (Danny Glover) advises him to put on a “white voice”; when Cassius starts using one, we hear the words of David Cross coming out of his mouth.

His success gets him kicked upstairs to the “power callers” office, but of course, there’s a catch; Cassius is now plying his trade on behalf of a nefarious corporation run by Steve Lift (Armie Hammer), who has made a fortune on a “live and work” labor force that looks an awful lot like slavery. As Cassius sells out for success, he becomes a viral video sensation after crossing a picket line, alienates his old friends, and risks losing girlfriend Detroit (Tessa Thompson). (Detroit is no stranger to code-switching; her performance art involves using a white voice of her own, provided by Lily James.)

The cast delivers on Riley’s vision, making the absurd seem real and vice versa. Stanfield radiates a low-key sweetness and empathy which makes us follow Cassius down the film’s twisted trails, and Thompson brings the eccentric, sexy Detroit to life as far more than a stock girlfriend character, even when Riley tosses her into a thoroughly extraneous love triangle subplot with union organizer Squeeze (Steven Yeun).

Most importantly, these characters live and breathe, which keeps them from being mere megaphones for the bigger issues that the film makes about being black in 21st century America. Even Hammer’s glad-handing cokehead is a delicious portrait of smarmy fake-wokeness, although his character’s ultimate scheme is one of the areas where “Sorry to Bother You” gets lost in trying to achieve the director’s vision. But whatever doesn’t work here is far outweighed by all the things that do, from the inspired costume and set design choices to blistering commentary on race relations and corporatization.

Ultimately, “Sorry to Bother You” does what every great first film should: it heralds the arrival of an exciting new talent and generates enthusiasm for what’s going to be in that second feature.