The “Back to the Cold War” episode finds Mr. Mackey throwing himself into Cold War prep by issuing non-stop nuclear emergency drills, as well as budget requests for a bomb shelter and 25 VHS copies of “Red Dawn,” the 1984 movie about an alternate 1980s where a ragtag group of teenagers fights Soviet troops invading the United States. 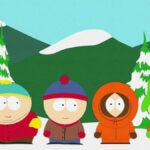 The synopsis for the non-Cold War part of the episode: “A lot is riding on Butter’s ability to crush the competition in the all-important dressage championship.”

The episode airs March 2 at 8 p.m. ET/PT on Comedy Central and will be available to stream on SouthPark.cc.com, CC.com and the Comedy Central App after its premiere.