How does one (or two) spend $900 million? “South Park” creators Matt Stone and Trey Parker are using the massive haul they just got from ViacomCBS to branch out from just making the popular animated cartoon they’ve been doing since the Clinton administration.

Stone spoke with Bloomberg over the weekend and broke down the pair’s eye-popping new overall deal with ViacomCBS. He said the duo are going to use that money to expand into other arenas, like a horror franchise, a “South Park” video game and even a real-life weed business based on the fictional Tegridy Farms, which was introduced in the Comedy Central series’ 22nd season.

“We have a ‘South Park’ 3D video game, release date unknown. We’re doing deep fakes. We have a studio with a dozen people who are deep fake artists. We’re working on a little more of this deep fake movie we’re trying to piece together,” Stone said. “We have a horror movie. A musical. I think we’re really for the first time going to bring Tegridy Weed into real life.” 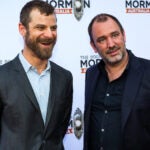 Parker and Stone’s new pact with ViacomCBS’s MTV Entertainment Studios extends their partnership through 2027, which will take “South Park” through its 30th season and consist of a whopping 14 movies. Two of the upcoming 14 made-for-streaming “South Park” movies will debut on Paramount+ in 2021, with two more rolling out each year after that, according to ViacomCBS.

“A couple movies go to ViacomCBS, and a couple are carved out because we have partners. The deep fake one is in the deal. We have a documentary crew that’s been following us for years in this deal,” Stone said.

Co-created by Parker and Stone, “South Park” premieredon Comedy Central on August 13, 1997. It most recently aired a full season, its 23rd, in 2019, with two standalone specials debuting during the pandemic in September 2020 and March 2021. No premiere date has been set for Season 24 yet.