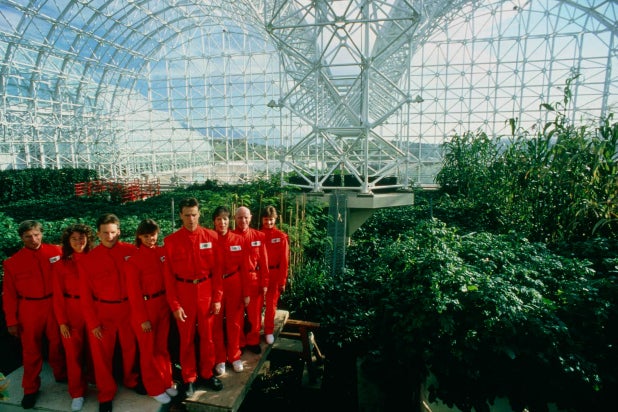 The story of “Spaceship Earth” sounds like the premise of a sci-fi movie, but in true stranger-than-fiction manner, this Sundance premiere (which starts streaming Friday on Hulu) is truly out of this world.

How else do you explain how a theater troupe from San Francisco would, decades after the fact, attempt a large-scale ecological experiment to prove humans could create sustainable habitats for life in outer space?

Rich with archival footage and first-hand accounts of people who were a part of this earthbound interstellar trial, Matt Wolf’s documentary shares many a tall tale that would be almost unbelievable were it not for the vintage footage.

Also Read: New Space Force Uniforms Mocked for Camo Design: 'Are They Fighting on the Forest Moon of Endor?'

Not to be confused with the EPCOT attraction of the same name (although it does make a cheeky cameo), “Spaceship Earth” beams us from the first day of the Biosphere 2 experiment in 1991 to 25 years earlier and the group’s countercultural roots in Northern California, where free-thinkers and misfit dreamers found each other and united under the shared plan of one day living off the land on their own.

One by one, different members of the group are introduced by how they came to follow a charismatic leader from Oklahoma named John Allen. He forms the Theater of All Possibilities, mixing his ideas of higher callings, science and environmentalism with experimental theater.

With cult-like devotion to Allen, the group decamps to New Mexico to learn how to farm and live together. They then move up to Berkeley, where the resourceful team builds a boat big enough for their entourage and sturdy enough to sail around the world. Free-spirited as they might have seemed, they were American capitalists at heart, and they learned to go into business to support their freewheeling lifestyle, which is how they crossed paths with Texas oil heir Ed Bass.

The feats described in the documentary are impressive, no doubt, and it’s easy to see where the crew’s years of adventures, entrepreneurs and would come in handy later in life, but it takes the documentary quite some time before it returns to the moment of truth in 1991. Perhaps the treasure trove of archival options was too good to pass up, or that the narrative leading up to the Biosphere 2 project was so bizarre, it had to be told in its entirety. Some of these threads feel only tangentially related, when the story of the project itself was strange enough on its own merit.

In 1991, the group — now a more polished corporation — sent eight men and women, clad in what looked like stylish space jumpers, to lock themselves in a stunning geodesic biodome that would house several different environments hermetically sealed from the outside world. At first, it seemed like a paradise, and some of the subjects in the documentary referred to it as “biblical” and like a “Garden of Eden.” Seeing as no experiment of its kind had ever been attempted before meant that there were scores of untold problems. And there’s one late twist in the final act that just about confirms “Spaceship Earth” as one of the weirder documentaries in the Sundance U.S. documentary competition.

Yet, in this story of hippies vs. corporate overlords and well-meaning activists vs. scientists, there’s a clear connection to the worries and fears about climate change. What worried the do-gooders and scientists back in the ’80s is now a full-blown crisis, between endless wildfire seasons, stronger hurricanes and rising temperatures. “Spaceship Earth” is no mere 20th century curiosity; it’s a testament to the group of outsiders who did try to grab the world’s attention about climate change through theatrics and to do something substantial about it.

“Spaceship Earth” begins streaming on Hulu on May 8.