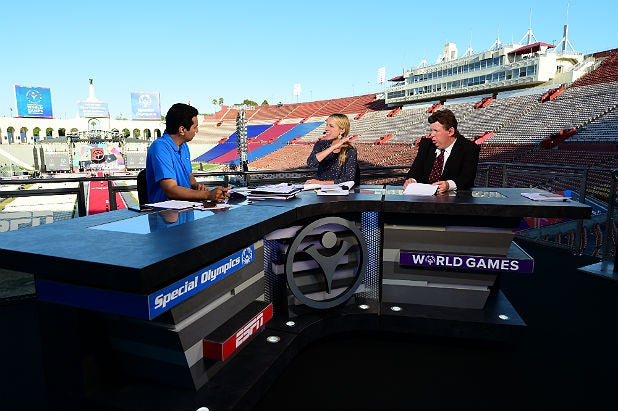 The Special Olympics World Games opened with a star-filled extravaganza at the Los Angeles Memorial Coliseum on Saturday, but beyond the A-list musical performances, inspiring speeches from the likes of Michelle Obama and glittering fireworks display are countless stories of struggle against the odds.

Over 7,000 athletes with intellectual disabilities from 165 countries will compete in 25 events over the next nine days in venues across L.A., cheered on by roughly a half-million spectators while being helped by 3,000 coaches and 30,000 volunteers. The wide-ranging sports include basketball, track, volleyball, gymnastics, equestrianism, aquatics, soccer and cycling.

“There is such an awareness and sense of pride, it is so contagious. I believe it is more of a community than the regular Olympics,” ESPN’s “SportsCenter” host Kevin Negandhi told TheWrap of the Games, which will air throughout the week on the sports network.

“Sport is an incredible way of inclusion. All they want is the opportunity to compete. At the end of the day, no one is counting the medals,” he said.

“Let me win. But if I cannot win, let me be brave in the attempt,” is the mantra of the Special Olympics for the athletes who have already had to overcome conditions including autism, Down syndrome, learning disabilities and fragile X syndrome to get to where they are.

“These athletes compete because they are doing it for the love of the game. Not because they are getting a contract or a commercial,” Kate Jackson, who is co-producing the Games for ESPN, said. “Every one has a truly inspiring story of courage. That is what is infectious and that is why people like Olympic swimmer Michael Phelps (who is a Special Olympics global ambassador) got hooked.

“The impact they have on these stars is what you are going to see across America when the Games are aired in people’s living rooms,” Negandhi added.

Joining Negandhi and co-host Lindsay Czarniak is former Special Olympian Dustin Plunkett (pictured above), who will act as an ESPN reporter and analyst throughout the Games. Plunkett is part of the reporting team alongside Jeremy Schaap and Marty Smith.

During ESPN’s nightly coverage, “you will see it’s about celebrating the athletes, their families and really showcasing them and telling their stories,” through guest interviews and features. “The Countdown To The Special Olympics World Games With Robin Roberts” delved into many of those back stories, and the “Good Morning America” anchor also hosted the Opening Ceremony.

The Special Olympics was founded by Eunice Kennedy Shriver in the backyard of her Maryland home in 1962, and has since grown from a summer camp into a global event. Eunice, who was President John F. Kennedy’s sister, passed on the torch to her own children, Maria and Tim Shriver, who are both heavily involved in the Los Angeles Games. A 30 For 30 Short film titled “Brave In The Attempt” that was executive-produced by Maria Shriver premiered on ESPN Saturday.

ESPN is the official broadcaster of the Special Olympics World Games, and coverage will be carried across its networks in the U.S. (ESPN, ESPN2, ESPN Deportes), WatchESPN and ABC, as well as transmission in at least 170 countries and territories around the world now through Aug. 2.