“Spectre,” the 24th James Bond movie, is heading for an explosive $80 million-plus opening at the domestic box office, according to pre-release tracking that became available Thursday.

That would put it in the same range as the previous 007 movie “Skyfall,” which debuted to $88 million in November of 2012. It became the highest-grossing Bond film ever, taking in $1.1 billion worldwide for Eon Productions, MGM and distributor Sony Pictures, the same team behind “Spectre.”

No one from those companies was commenting Thursday. However the tracking number, intended as a marketing gauge more than a box-office forecast, is particularly impressive because the film’s promotional campaign has yet to fully kick in.

Also Read: 'Spectre' Director Sam Mendes Says New James Bond Movie Is an Origin Story: 'This Is Only the Beginning'

“Spectre” will have its world premiere in London on Monday, Oct. 26, and open in U.K. theaters that same night. It opens in the U.S. and worldwide on Friday, Nov. 6. Pre-sales for “Spectre” in London have been double those for “Skyfall.”

Daniel Craig is back for his fourth turn as 007 and Sam Mendes is back for his second go-round as director in “Spectre,” after winning praise for the critically lauded “Skyfall.”  Christoph Waltz joins the cast as the baddie.

The success of “Skyfall,” could have a bearing on the fortunes of “Spectre.” 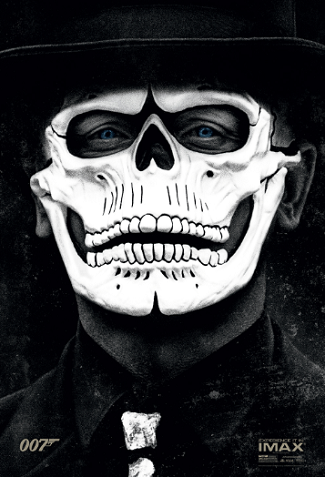 The considerable goodwill from that film should help “Spectre” get off to a strong start, and the tracking numbers reflect that, but if it fails to measure up to those standards, it may suffer at the box office.

It is also opening up against Fox’s “The Peanuts Movie,” which analysts believe will open at $50 million plus, whereas “Skyfall” had an open field.

It has some other challenges. Craig’s recent comments that he’d rather slash his wrist than return for another Bond film aren’t going to help.

And an early version of the script leaked in the Sony hack, and later the storyline was reportedly tweaked to secure a $20 million incentive from the government in Mexico, where parts of “Spectre” were filmed. On Thursday, IMAX released a poster of Craig as Bond in a Day of the Dead mask (photo) from one of the movie’s opening scenes filmed in that country.

None of the negativity will matter if the film works however, and the two trailers have been well-received and have ignited broad and positive social media buzz.

“Spectre” is a significant play for all involved. The 23 previous Bond movies have grossed more than $4.1 billion globally. Sony’s deal to distribute the Bond films expires with “Spectre.” The British firm Eon Productions, headed by Barbara Broccoli and Michael Wilson, holds the film rights to Bond with MGM. They are not expected announce a decision on a new distribution pact until after the opening.