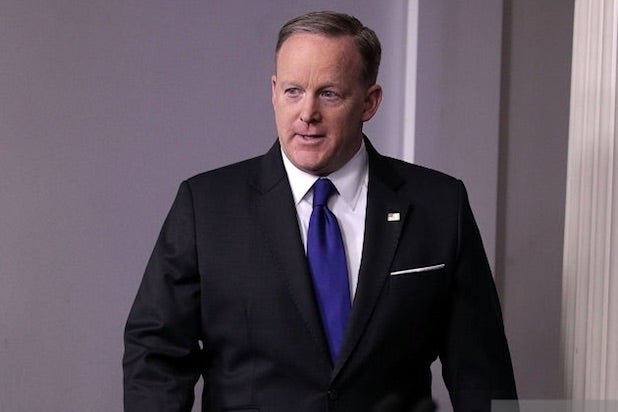 Sean Spicer refused to answer questions about whether or not President Trump is secretly recording private conversations inside the Oval Office during Monday’s press briefing despite the president hinting at taping conversations on Twitter.

“The president has nothing further to add on that,” the White House press secretary said repeatedly.

NBC News’ Hallie Jackson eventually asked, “Why won’t you just explain whether or not there are recordings?”

Spicer fired back, “The president has made it clear what his position is,” before Jackson followed up: “Given that you refuse to confirm or deny any of this, how is any senior official supposed to feel comfortable having a conversation privately with the president?”

“As I’ve said, Hallie, the president has made it clear what his position is,” Spicer said. “I’ve answered the question over and over again in the same way.”

Last week, President Trump warned recently-fired FBI Director James Comey not to leak to the press during a Twitter rant, hinting at “tapes” of their private conversations. On Saturday during an interview with Fox News host Jeanine Pirro, Trump mildly defended Spicer’s position as press secretary, saying, “He’s doing a good job but he gets beat up.”

Spicer, perhaps trying to please his boss, appeared annoyed-yet-subdued and pushed back at reporters on Monday.

Twitter reaction to Spicer’s non-answer on the tapes was quick and harsh:

.@HallieJackson presses Spicer on tapes, asks how anyone can be comfortable discussing things privately with Trump. Spicer remains a clam. pic.twitter.com/kN3zCV1DLs

It should go without saying that this charade is ridiculous. The public deserves to know if there are tapes.

It should be noted Spicer's claim that Trump has made his position on the tapes clear is false. Trump hasn't said anything beyond his Tweet.

Spicer refuses to say whether there are tapes or not

So the only options are: 1. Spicer didn't ask Trump if he's taping others. 2. He did ask but Trump won't say. 3. There are tapes.

Sean Spicer: "trump has nothing further on that."

Me: This WH is criminal.

On the question of possible tapes, Spicer still repeating line that he has nothing further to add.