With final weekend numbers in, “Spider-Man: Homecoming” officially has the second-biggest opening for the famous web-slinger, finishing second to “Spider-Man 3” but outperforming the 2002 original and both of Andrew Garfield’s “Amazing Spider-Man” reboot films.

But when the numbers are adjusted for inflation, they reveal a different trend that shows just how much times have changed since Tobey Maguire first slipped into the red-and-blue suit 15 years ago.

While “Homecoming” is still a big win for Sony and Marvel Studios, it is definitely facing a far different cinematic landscape than before “Iron Man” changed everything.

Also Read: 'Spider-Man: Homecoming': Can He Really Do Whatever a Spider Can (and Vice Versa)? 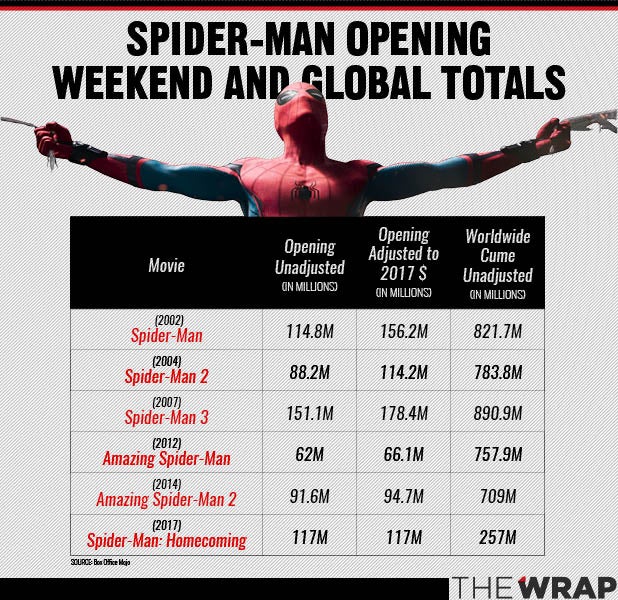 With adjusted numbers, “Homecoming” remains above the two Garfield films, but 2002’s “Spider-Man” jumps way ahead with a $156.2 million opening. “Spider-Man 2” stays just behind “Homecoming” with an adjusted $114.2 million total, though that number is also weighed down by the fact that “SM2” was released on a Wednesday for the July 4 weekend. The four-day opening for “Spider-Man 2,” adjusted for inflation, was $165 million.

Last decade, Sam Raimi‘s “Spider-Man” films were the unquestioned kings of the comic book movie world, and today, they are the only pre-Marvel Cinematic Universe superhero films that are still in the top 20 highest grossing movies of the genre, according to Box Office Mojo. While those films made well north of $750 million, its mid-decade peers like the “X-Men” sequels and “Batman Begins” settled in the $350-$450 million global range.

But in 2008, “Iron Man” began the rise of Marvel Studios into a tentpole behemoth, while the $1 billion worldwide gross of “The Dark Knight” pushed the boundaries of what a comic book movie could make. Those higher expectations were locked in stone four years later with “The Avengers” and “The Dark Knight Rises, both of which joined the $1 billion club.

“The Amazing Spider-Man” and its sequel, which made $757 and $708 million worldwide, respectively, would have been considered undisputed successes a decade earlier. But with $200 million-plus budgets, lukewarm reception from critics and audiences, and the aforementioned billion-dollar hits raising the bar, the “Amazing” era was not able to preserve Spidey’s status as the king of event releases. “Spider-Man” helped pave the way for a world where multiple Marvel and DC films dominate the annual box office charts and San Diego Comic-Con is a marquee event for Hollywood. Now it was being perceived as falling behind the trends it started.

Exhibitor Relations analyst Jeff Bock says that “Spider-Man: Homecoming” did its main job in reviving buzz around Spider-Man, but believes that the franchise will need to be able to stand on its own without Iron Man and the MCU as a hook in future installments.

“Sony needed this in a major way to plant a seed and ensure that they can keep going with ‘Sinister Six’ and ‘Venom’ and all these other plans they have with the franchise,” Bock said. “But without the help of Marvel it could be a dangerous flight going forward. They have to have the right stories to go along with it. I just don’t think it’s as airtight as the Avengers or some of the DC properties.”

If the opening is any indication, this teenage Spidey might not be as sure a property as “Avengers” or “Justice League,” but it’s done better than a lot of Marvel solo outings. Sony had predicted a $80 million opening weekend for “Homecoming,” which was slightly more conservative than what independent trackers had predicted ($90 million to $110 million). Still, Spidey managed to surpass predictions and earn $117 million its opening — a number higher that the openings of “Guardians of the Galaxy,” “Captain America: The Winter Soldier,” “Doctor Strange” and even “Wonder Woman.”

In an era of streaming, 52-week release calendars and prestige television, a “Spider-Man” movie release may never again be as big a can’t-miss event as it was when Sam Raimi and Tobey Maguire were piloting the ship, but it’s safe to say he’s found a good place in this new world. Rather fitting considering Tom Holland’s Peter Parker spends the duration of “Homecoming” in search of an identity in a world filled with superheroes, and one in which he must fight for respect both in the classroom and at Stark Industries.

'Spider-Man: Homecoming': How the Actors' Ages Compare With Their Teenage Characters (Photos)

Are all those teenagers who hang around with Peter Parker really teenagers?

“Spider-Man: Homecoming” largely takes place in the high school of Spidey’s alter-ego, Peter Parker (Tom Holland). Appropriately, it’s filled with high schoolers. But while the characters in the movie are all around the ages of 15 to 18, Hollywood routinely casts actors who are much older in such roles. So how old are the actors of “Spider-Man: Homecoming?” Here are all the kid characters and their actors’ true ages.