The Thursday event drew Hollywood and business titans, celebrities and fans to a custom venue that took up the entire block of Hollywood Boulevard where iconic venues the Dolby Theater, the El Capitan, Jimmy Kimmel’s late night set and the Hollywood Roosevelt Hotel sit.

Long red carpets and expensive receptions are hallmarks for tentpole premieres but the Sony Motion Picture Group, led by Tom Rothman, essentially showed the industry what a Spider-Man-themed set in an amusement park might look like — powered, of course, by Sony products.

Also Read: 'Spider-Man: Homecoming' Is 'One of the Best Marvel Movies Yet' and 6 More Glowing Reviews 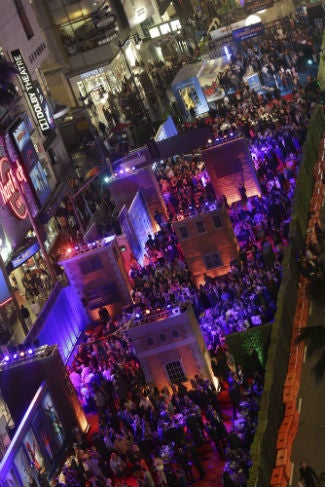 Dell hosted a truck just for gaming. A rock climbing wall was set up over the famous hand-and-footprints of Mann’s Chinese so partygoers could take a stab at being Peter Parker himself.  The studio also gave tickets to fans that made the best Spidey costumes from scratch. Audi erected a stage to show off their R8 Spyder.

We spotted Rothman playing in the escape room. Robert Downey Jr., wife Susan and Netflix Chief Content Officer Ted Sarandos were ogling a Spider-Man performer doing gymnastics on a series of beams above the party. On top of being a fanboy dream, it was an experimental way to disrupt the grip-and-grin nature of these routine Hollywood parties.

Stunts like these are not unheard of. Disney trotted out Luke Skywalker’s X-Wing Fighter jet for the 2016 premiere of “Rogue One,” and parked it right in the middle of Hollywood Blvd. Almost a decade ago, “Ocean’s Thirteen” set off fireworks from the lot behind Kimmel.

What’s interesting about the “Homecoming” event is how it looks to evolve premieres — and not waste a second in engaging the industry and fans in their product.