Issa Rae will lend her voice for Sony Pictures Animation’s sequel to the studio’s Oscar-winning feature, “Spider-Man: Into the Spider-Verse,” to be directed by Joaquim Dos Santos, Kemp Powers, and Justin K. Thompson, according to an individual with knowledge of the project.

The sequel to “Spider-Man: Into the Spider-Verse” is set to release in theaters on Oct. 7, 2022. Plot details are being kept under wraps however, it is being reported that Rae will voice Jessica Drew, aka Spider-Woman.

The original “Spider-Verse” film from 2018 was critically acclaimed for its animation style and story, which followed Shameik Moore as the voice of Miles Morales, who becomes the next Spider-Man and recruits the help of a lazier Peter Parker from another universe along with an array of other Spider-Men and even Spider-Pigs. 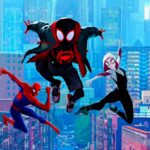 Returning as producers on the new “Spider-Verse” are Phil Lord, Chris Miller, Amy Pascal, Avi Arad and Christina Steinberg. Alonzo Ruvalcaba will co-produce. Lord and Miller will also be credited as writers on the film, along with David Callaham.

Rae is currently filming the fifth and final season of the hit HBO comedy “Insecure” and has a second season of Robin Thede’s “A Black Lady Sketch Show,” which she is also executive producing. Upcoming television projects include the docuseries “Seen & Heard” and the unscripted series “Sweet Life,” as well as the hip hop comedy “Rap Sh*t” at HBO Max. On the film side, Rae’s HOORAE production banner is currently working on “Perfect Strangers” with Spyglass Media.